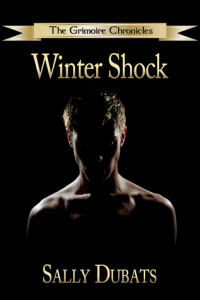 “Trenton drugged and kidnapped me. I was powerless.”

ainst her will to an isolated, frozen wilderness on an impossible quest, Cassie defends herself against Trenton who has gone over to the dark side. One minute he’s adorable and charming, and the next weird, uncaring, and hostile. And now, Cassie fears for her life.

Winter Solstice draws near, and Cassie performs magical spells to gain clarity. Instead she is shocked by visions and mind jumps into the lives of strangers on the brink of disaster.

Why is she in a hostile, threatening wilderness? What is causing the horrific visions? Cassie discovers there is much more at stake than her own survival. To survive, she must overcome impossible odds.

I truly love Sally’s books!  Winter Shock is the second book in the series, continuing Cassie and Trenton’s story from the first novel, Veil Between Worlds.  As much as I loved the first novel, I think I loved this one even more.  The intrigue and suspense in this book was even greater than that of the first.  For most of the first half of the book, all I wanted to do is reach into my Kindle and slap Trenton silly.  His behavior was just as confusing to me as a reader as it was to Cassie, his girlfriend.  This truly added to the suspense of the story, as we just couldn’t figure what he was up to!

A definite must read if you enjoy witchy fiction.  It’s truthful and completely easy to lose yourself in!

My latest project is “The Grimoire Chronicles”. It will be a series of eight paranormal fantasy books based on the Wheel of the Year. It is a mix of magic and fantasy. I hope you enjoy!

I would love to hear from you! Send me an email by clicking the button or other social media buttons on the upper right, and join the Monday Magick mailing list to the right to stay in touch.