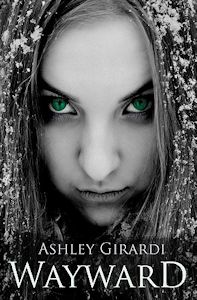 Born without magic, seventeen-year-old Helena “Hex” Wayward is an embarrassment to her power-hungry relatives.

As the weakest member of the world’s most deadly magical family, Hex learns early how to avoid confrontation. There’s no defending herself against an errant curse or the pit-demon that her cousins like to summon during family reunions.

When the dark magic inside of her -- magic that she never dreamt even existed -- erupts in a violent display, it kills a member of a rival family.

Now, Hex's family hopes to use her magic for their own sinister purposes and their enemies just want her dead. Abandoning her magic will leave Hex defenseless but she's seen how quickly power corrupts even the best intentions.

She has to make a choice:

Save her life or save her soul.

The first in a new series by Ashley Girardi, Wayward, is a great beginning to what I am positive is going to be a fun series to read.  It had all the makings of a really good YA paranormal/urban fantasy novel.  Danger, bad boys, snarky girls, and all of that compouned by magical problems and battles for survival.  While the plot has the classic themes of good vs. evil, the lines between them aren’t crisply defined.  There are lots of gray areas both in situations and in the characters, which I think makes for a more interesting read.  Hex was born to be the prodigal daughter of one of the most powerful magical familes, and that alone sets her up for a life of danger and mistrust, never knowing who was her enemy, who she could trust, even within her own family.  The struggle within her between her role in the magical role and her soul was the major thrust of the plot.

The characters were what truly made the story,  All of them, main or supporting, were very much brought to life by the author.  Hex was a wonderful main character who was completely believable, complete with all of the normal teenage girl problems on top of her magical ones.  Cynthie was the epitome of snobby, snarky rich girl and there were times when I wanted to reach into the book and slap her.  Sam and Zach, as the necessary human side of the story, were also extremely likeable.  Hex’s parents, while my least favorite people within my story, were also very well created.  Her father was a power hungry man who wanted nothing more than more power, having zero capacity for anything resembling compassion.  Hex’s mom fell somewhere in the middle, which was a little mysterious.  She never openly went against her husband in defense of Hex, but she was the only one in the family who showed any kind of love towards Hex.  You never really knew where her loyalties lay, with the power and the money that being a Wayward brought or with her daughter.  I hope that she has a bigger role in future stories. The ending was everything you could want in a YA novel.  It paved the way for the next book, but it also ended with a bit of romance!  And the cover is beautiful, very stunning and a little dark.

Ashley Girardi is 26-years-old and plans to stay that way for the better part of the next decade. She’s dabbled in a number of professions, from the service industry to military intelligence. While her current goals include publication, that’s really just a circuitous route to world domination.

Ashley’s influences include Friedrich Nietzsche, Kurt Vonnegut and Lady Gaga. Her favorite color is fluorescent beige and her favorite quote is from Robert A. Heinlein:

“Writing is not necessarily something to be ashamed of, but do it in private and wash your hands afterwards.”

One response to “Wayward”