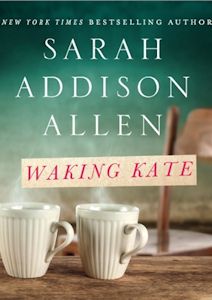 From the beloved author of Garden Spells, comes Waking Kate, a story about a woman who soon will face an unforseen change in her life. One sticky summer day  as Kate is waiting for her husband to come home from his bicycle shop, she spots her distinguished neighbor returning from his last day of work after  eighty-six years at Atlanta’s oldest men’s clothing store. Over a cup of butter coffee, he tells Kate a story of love and heartbreak that makes her remember her past, question her present, and wonder what the future will bring.

I have been in love with Sarah Addison Allen’s work since her debut novel, Garden Spells.  The themes of her books are not light, but somehow she writes the stories of her characters in  mystical, whimsical, and magical ways.  Her writing is just beautiful.

Waking Kate is a very short read, a prequel to the soon-to-be released Lost Lake.  We meet Kate, a wife and mother who seems to be at a crossroads in her life.  We don’t really find out what that is, clearly something that will be revealed in Lost Lake.  She seems to be unsettled, feeling in her heart and soul that life is what is seemed or maybe should be with her husband.  She goes through a bit of a transformation during a conversation with an elderly neighbor, but, in true Allen style, we are left wondering about that conversation.  Did it really take place or is it something she dreamed.  A nice lead-in to the new book!

A must read for fans of Sarah Addison Allen!  It is free and it is short and a wonderful lead-in to the highly anticipated Lost Lake.