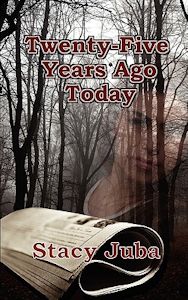 Kris Langley has always been obsessed with murder. She blames herself for the violent death of her cousin when they were kids and has let guilt invade every corner of her existence. Now an editorial assistant and obit writer for a Massachusetts newspaper, Kris stumbles across an unsolved murder while compiling "25 Years Ago Today" items from the microfilm. She grows fascinated with the case of a young cocktail waitress who was bludgeoned to death and dumped in the woods. Determined to solve the case and atone for the death of her cousin, Kris immerses herself in the mystery of what happened to Diana Ferguson, a talented artist who expressed herself through haunting paintings of Greek mythology. Not only does Kris face resistance from her family and her managing editor, she also clashes with Diana's suspicious nephew, Eric Soares - until neither she nor Eric can deny the chemistry flaring between them. Kris soon learns that old news never leaves the morgue and that yesterday's headline is tomorrow's danger, for finding out the truth about that night twenty-five years ago may shatter Kris's present, costing her love, her career, and ultimately, her life.

Twenty-Five Years Ago Today is the debut adult novel from author Stacy Juba.  It has all the makings of a classically great murder mystery:  high drama, murder, mystery, family dysfunction, unexpected twists, and even a bit of romance.  Kris Langley is a woman tortured by guilt over what she perceives as her blame in the death of her cousin and best friend Nicole.  Because of that she has spent her entire life punishing herself and trying to find a way to right that wrong.  When the story of Diana Ferguson crosses her desk in the course of her job, Kris becomes obsessed with solving the 25 year old murder and bringing peace to another family.  Through twists and turns and multiple subplots, the story line was a great one.  It had no end to the suspense, and kept me guessing to the end.  I thought I knew who the murderer was very early on, and assumed the rest of the book would be the back story leading to that inevitable, I thought (!), conclusion.  Instead, I was completely off base.

I liked the use of a little blurb at the beginning of each chapter.  That “twenty-five years ago today” news blurb really tied together the title, the solving of Diana’s cold case, and Kris’ job at her paper.  It was an interesting technique that really furthered the story line.

Kris was completely likeable as a main character.  I became so involved with her that I was fully irritated for her character during 90% of the scenes with her mother and sister.  Her angst and guilt was almost palpable throughout the story.  The supporting characters were easily as intriguing as the lead, particularly those in Diana’s family.  Juba does a very good job of creating believable characters.

The conclusion made the story for me.  It was so unexpected for me and I absolutely love the element of surprise in a genre that all too often can be too formulaic. A great read that should NOT be overlooked!

Award-winning writer Stacy Juba loves to write about Characters at a Crossroads: individuals who are finding themselves and getting on the right life path after overcoming obstacles. Her goals are to entertain readers of all ages as well as inspire them. Stop by her website to browse her books, for some freebies and for ongoing tips on how to build your own “character.”

Her adult mystery titles with a touch of romance are TWENTY-FIVE YEARS AGO TODAY AND SINK OR SWIM.

She is also the author of the young adult paranormal thriller DARK BEFORE DAWN, the young adult family hockey novel FACE-OFF, the patriotic children’s picture book THE FLAG KEEPER, the TEDDY BEAR TOWN CHILDREN’S BUNDLE, and the YOUNG LADIES OF MYSTERY BOXED SET. She is the editor of 25 YEARS IN THE REARVIEW MIRROR: 52 AUTHORS LOOK BACK.

« Better Together
The Fire Inside »