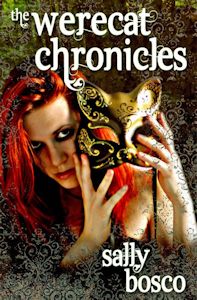 Confused by heightened senses and a heat that overwhelms her body and mind, shy, sheltered Kenley discovers that she’s a werecat. And not just any old werecat—she’s part of a royal lineage that goes back to Egyptian cat goddesses. She’s eager to embrace her new heritage. After all, who wouldn’t want the strength and agility of a cat and, well, a few other special abilities? But when she falls in love with Luis, the crown prince of an opposing faction of werecats, she’s tempted to do the unspeakable to be with the boy she loves.

The Werecat Chronicles is the first on what the author intends on being an entire contemporary series following these werecats back in history to the time of Nefertiti.  From the moment I began reading, I couldn’t put this series down.  It was fascinating, and unlike any other “were” books I have read.  There was a little bit of everything,… angst, sadness, pain, love, romance, intrigue, fear, courage.  I loved Kenley, seemingly an average teenager with all the angst that is normal.  When her life flips upside down, she realizes that she is not as average as she once thought.  What I loved about this theme was that the author fostered the idea that suddenly finding out you were so much more than you had believed was not the key to easy life.  Instead, Kenley’s life was almost no longer her own.  She was pulled in every direction, never sure what was true and what was deception.

While a paranormal story, there was so much of the mundane life in it and the two combined to create a really engaging story.  Rather than overpowering the humanity of the story and it’s characters, the paranormal themes enriched them.

From the first page to the last, I was hooked!

Sally Bosco has a fascination with gender: the perceptions we have, the attitudes people have toward those who don’t fit into the usual categories, and the feelings we have about our own genders. She is inexplicably drawn toward the Uncanny, the shades of gray between the light and dark, the area where your mind hovers as you’re falling off to sleep. She loves writing young adult fiction because she strongly relates to teenage angst, the search for self-identity and the feelings of being an outsider.

Her published novels include Death Divided (written with Lynn Hansen), The Werecat Chronicles, and her newest book (and thesis novel), Cevin’s Deadly Sin, the story of a hetero teen cross-dresser struggling to make it through his senior year in a small Florida town. She has also been published in Many Genres, One Craft, Small Bites, Hazard Yet Forward, and Cellar Door anthologies. She has an MFA degree in Writing Popular Fiction from Seton Hill University.