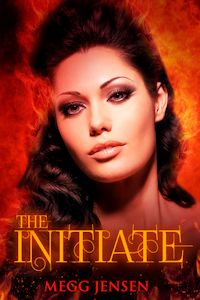 Over a thousand years ago, the gods left Eloh's people and took their magic with them. To win back their favor, her people sacrifice ten female initiates every ten years. No has ever survived. There has never been a Chosen One.
Forced into becoming an initiate, Eloh will try to find a way to beat the odds, stay with her boyfriend, and survive the fires that threaten to consume her. But will her lack of faith in the gods and her disbelief in their magic doom her to a painful death?

The Initiate is a novella that bridges the original Cloud Prophet trilogy and the new Swarm trilogy, a prequel to both.  While the novella can stand alone, it has the threads that will eventually weave together with the trilogies of the Cloud Prophet and Swarm trilogies.  It tells the story of Eloh who we meet in the Cloud Prophet trilogy.  In that, Eloh was the wise one, while this story tells of her as she is the one in need of guidance. She is living in a world in which magic has disappeared.  Eloh has been chosen to be one of the initiates in a ritual that is to appeal to the gods that took their magic.  On the surface, it is to be ritual in which a Chosen One will pass initiation.  However, no one has ever survived.  It was as emotionally charged and full of mystery as all of the other related books, and it it explained a great deal.  As with all of her books, I wish it was longer.  Not because it was missing a single thing, but because these books just pull me in and I don’t want to let them go!

This is a fantastic series that I have loved from the beginning!  While the Cloud Prophet trilogy is complete and available, this novella is a perfect choice to read before starting the Swarm trilogy with the first book, Sleepers, already available.  The next in this trilogy is Afterlife and will be out some time in 2012.