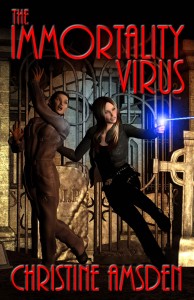 In the mid-21st century, the human race stopped aging. Those who know why aren't talking, and the few who are brave enough to ask questions tend to disappear. To an elite few, The Change means long life and health, but to the increasing masses, it means starvation, desperation, and violence. Four centuries after The Change, Grace Harper, a blacklisted P.I., sets off on a mission to find the man responsible for it all and solicit his help to undo The Change - if he's still alive. To complicate matters, Grace's employer is suspected of murdering his father, and when the police learn of their connection, they give her a choice - help them find the evidence they need to convict Matthew Stanton, or die. But if they discover Grace's true mission, they won't hesitate to kill her in order to protect their shot at immortality.

The Immortality Virus is set in the mid-21st century, in a a world far different than that which we know today.  Centuries ago, a virus was found that stopped the aging process in humans.  Life and society has changed drastically since The Change.  Life has largely become a “everyone for themselves” fight for survival.  Starvation and slavery have become everyday concerns for most of the population because of the ever increasing number of people.  Centuries after the change began, blacklisted PI Grace Harper is hired to find the man who is responsible for the virus that created The Change.  Within hours, she is also recruited by the police department to investigate the man that had just hired her.  Caught between the two opposing parties, Grace has a choice,… between finding a way to fulfill both requests or to die.

Science fiction and dystopian fiction never used to be among my favorite genres, but the more I read of it, the more I enjoy it.  This book is a true example of one to enjoy.  The plot, while complicated at times, was absolutely engrossing.  There were a lot of twists and turns, and far more than two single sides fighting one another.  At any given time, Grace had several factions after her.  Yes, there were times when that got a bit confusing with so many different “enemies” involved.  But I think the confusion for the reader was deliberate as it completely reflected Grace’s own confusion.  That confusion is also what kept me completely into the story, always wanting to know what was really going on.  I just couldn’t put it down!

The world the author created, with bits of my own reality mixed in, was an entirely believable, possible future.  I like dystopian fiction that makes me question things and this definately made me question a lot of things.  Seeing the world and society in this book, would I really want to live forever?  The lack of humanity in the dystopian world was horrifying and very sad.  It was almost a question of whether there had been too much technology and not enough humanity involved in advances that would drastically change the world as we know it.  The scrabbling, fight of survival existence that went on in the book was an exaggeration of some of the outer fringes of our own society today and that made the world of the book that much more believable. All in all, I felt like it was a brilliant book!

Christine Amsden has been writing science fiction and fantasy for as long as she can remember. She loves to write and it is her dream that others will be inspired by this love and by her stories. Speculative fiction is fun, magical, and imaginative but great speculative fiction is about real people defining themselves through extraordinary situations. Christine writes primarily about people and it is in this way that she strives to make science fiction and fantasy meaningful for everyone.

At the age of 16, Christine was diagnosed with Stargardt’s Disease, a condition that effects the retina and causes a loss of central vision. She is now legally blind, but has not let this slow her down or get in the way of her dreams. (You can learn more here.)

In addition to writing, Christine teaches workshops on writing at Savvy Authors. She also does some freelance editing work.

Christine currently lives in the Kansas City area with her husband, Austin, who has been her biggest fan and the key to her success. They have two beautiful children, Drake and Celeste.

One response to “The Immortality Virus”