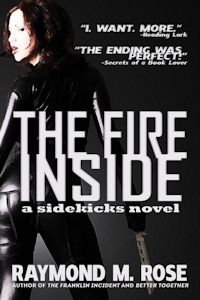 Jack King is going scorch the city to avenge his friend's murder.

When his best friend is murdered, former crime-fighter Jack leaps head-first back into a world he walked away from - a world more complicated and dangerous than he ever knew. With a squad of ruthless killers on his six and uncertain allies by his side, Jack is going to find his friend's murderer — even if he has to burn the city down!

"By the end of this book I was fist punching the air and looking for things to fight with my epic Highlander broadsword!" - Kelly, Reading the Paranormal

The first book in the Sidekicks Series, The Fire Inside is an urban fantasy crime thriller that grabs you by the throat and doesn't let go. Filled with exciting characters, sharp dialogue, and an edge-of-your-seat plot, The Fire Inside takes the reader on a roller-coaster ride where right and wrong isn't always black and white.

The Fire Inside is the first in a new series by Raymond Rose, Sidekicks.  This novel was a total departure from the kinds of fiction I normally read, very much like a comic book complete with larger than life superheroes and villians.  It was a very interesting and unique blend of the superhero/villian conflict genre and that of contemporary action-adventure.  The story being told was entwined with the backstory of ten years prior, in some places mirroring the plot in the present time.  Instead of making the story confusing to follow, this back and forth in time actually explained the backstory at key, related points in the present.  At times, it was almost like reading two separate stories.

Because the characters were comic book-style personalities that are larger than life, it could have made them overly campy.  Despite their super abilities, the characters all had a humanity that made them surprisingly easy to relate to.  Jack was an extremely likeable character who struggled to reconcile is superhero personna with his humanity.  Karen, his best friend’s widow, was also easy to relate to as she struggled with the pain of losing her husband.  All of the core characters were equally relatable in their own way, and were developed to be very different personalities from each other.  That kept the story interesting as the plot twisted and turned to an unexpected conclusion. Definately a great read! 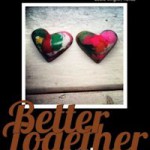