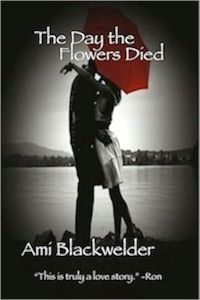 he Day the Flowers Died written by Ami Blackwelder is a gently narrated historical romance novel. Set in 1930 Munich, Germany two strangers fall in love in the midst of a crumbling country. Eli Levin was raised in a strict orthodox Jewish home while Rebecca Baum grew up in an affluent Catholic family. Despite their differences, they stay true to each other and form a bond that lasts well after the war. Through-out family disapproval, social prejudice and a growing Nazi party, they struggle and overcome; but when identity becomes the difference between life and death, the two must make decisions that will change their lives forever.

The Day the Flowers Died is a historical romance set in the years between WWI and WWII, telling the love story of Rebecca and Eli, a Catholic woman and a Jewish man.  The story line itself was a good one, with painstaking attention paid to creating the work of fiction around historical reality.  Dates and events were historically accurate, using real events as the framework for the story.  That blend of truth and fiction definately lent to the historical feel of the novel and allows the reader to feel present in the time of the story.  It was definately a love story, heart wrenching at times, and the story was full of all of the angst, fear and uncertainty of the time and allowed it to become more than words on the page.  That being said, the extreme amount of descriptive passages sometimes became unwieldy.  There were times that I became so bogged down in the descriptions of mundane things that I lost track of the story being told at the moment, causing me have to reread passages while skipping the descriptions just to regain the gist.  At times it felt like the humanity and emotion of the story was stilted by the abundance of minute details.  I think that really took away from what was a truly beautiful and touching love story.

Despite that, I enjoyed the characters within the story.  Rebecca and Eli were the symbols of the good that still existed during that horrible time in history.  Their friends and family were indicative of the varying viewpoints that tore families and friends apart.  They were very well-developed and very accurate for the time period of the novel.

I think that what I liked most about the book was the historical accuracy I mentioned at the beginning of this review.  It wasn’t a fluffy take on the time period, but full of the anger, fear and unrest that existed.  The ending of the book was in keeping with the historical accuracy of the rest of the novel, although I can’t expand upon that without giving a spoiler, but it was the perfect conclusion to the novel!

I think this is definitely worth a read.  What may have bugged me may not bug another.

“Ami Blackwelder is a Romantic Suspense author with a Unique Voice and Unpredictable Plots.”

When not writing, yelling at her beat-up Volkswagen, glued to her Siamese cat Lotus, Fabulous Keyboard, or reading books way into the night, Ami Blackwelder can be found on her website http://amiblackwelder.blogspot.com, singing in the shower, eating way too much spicy KFC chicken, and fantasizing about her next best selling book.

Her motto: They Defeat Those Who Believe They Can.

Growing up in Florida, she graduated to UCF (The Blair Witch Project University;) after her fiction From Joy We Come, Unto Joy We Return was published as Best Fiction 1997 in the on campus literary magazine Cypress Dome and remains to this day in University libraries around the country. Later, she achieved the Semi-Finals in a Laurel Hemingway contest and published a few poems in the Thailand’s Expat magazine, and an article in the Thailand’s People newspaper. Additionally, she has published poetry in the Korea’s AIM magazine, the American Poetic Monthly magazine and Twisted Dreams Magazine.