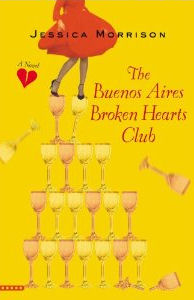 28-year-old Cassie Moore has always played it safe, living life according to a meticulously organized Master Plan. But when she loses her Perfect Job and finds her fiancé in bed with his ex on the same day, it's clear that The Plan has failed her. She awakens the next day from a drunken stupor to discover that she's booked herself
on a six-month trip to Buenos Aires. She speaks not a word of Spanish, but she's already emailed the news to everyone she knows, so there's no turning back. Once in Buenos Aires, Cassie is reluctantly seduced by this glorious city. Her exuberant landlady introduces her to the handsome but haughty Mateo, a man Cassie clashes with right from the start. She soon befriends other lovelorn travelers and together, they start a "Brokenhearts Club" at a local bar, attracting a cast of characters that includes Dan, a sweet handsome man who lives as carefully and predictably as Cassie. Before long, Cassie's making a new plan: 1. Learn Spanish. 2. Stop obsessing about impossible Mateo and fall for perfect-on-paper Dan. But staying on track isn't so simple anymore and Cassie finally realizes that sometimes life--and love-- defies her best-laid plans.

After her whole world seemingly crashes down around her, Cassie does the logical thing and gets blistering drunk!  When she comes to again, she realizes that, in her drunken stupor, she has made travel arrangements for a six month trip to Buenos Airies.  Being somewhat OCD in nature, Cassie does nothing without consideration, including mapping out her entire life plan.  Realizing that her plan has failed her, Cassie embarks on what turns out to be a life-changing extended vacation, without a single plan in mind.

The story follows Cassie as she struggles to recover and rediscover herself, her life, and her future.  Scared of love and finding herself questioning everything about herself, Cassie begins to blog about her experiences, earning herself a loyal and supportive online fan base.  Amidst conflicting encounters with the gorgeous Mateo, she pushes her boundaries farther than she ever has allowed herself.  The subplots are varied and all are engaging.  It is a light read, but that does not lessen its appeal in any way!

« Knitting Under the Influence
Garden Spells »