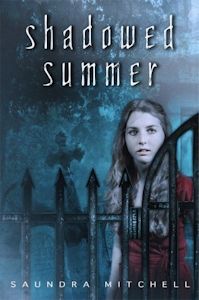 Iris is ready for another hot, routine summer in her small Louisiana town, hanging around the Red Stripe grocery with her best friend, Collette, and traipsing through the cemetery telling each other spooky stories and pretending to cast spells. Except this summer, Iris doesn’t have to make up a story. This summer, one falls right in her lap.

Years ago, before Iris was born, a local boy named Elijah Landry disappeared. All that remained of him were whispers and hushed gossip in the church pews. Until this summer. A ghost begins to haunt Iris, and she’s certain it’s the ghost of Elijah. What really happened to him? And why, of all people, has he chosen Iris to come back to?

Shadowed Summer takes place in the perfect southern, gothic setting of Louisiana in the summer, in a small town where nothing ever happens.  Iris and Collette are best friends, caught in the awkward stage between growing up and playing childhood games.  Their relationship, especially with the addition of a boy to the mix, is completely realistic.  The author did an exceptional job of developing all of the characters in the story, making them all entirely believable.  The descriptions were vivid, without being overdone, and completely pulled me into the story.  The plot was perfectly paced and kept me guessing until the end, never guessing the true conclusion. While geared toward the younger side of “young adult” readers, I think fans of the genre of any age would enjoy the story.

Saundra Mitchell is a longtime screenwriter and author. Random House’s Delacorte Press published her debut novel, Shadowed Summer, on February 10th, 2009. Houghton Mifflin Harcourt Children’s will publish her next novel, The Vespertine in Spring 2011, with its companion novel, The Springsweet, following in Spring 2012.

For almost ten years, she was the sole screenwriter for the Book of Stories, On the Road, Fresh Films and Girls in the Director’s Chair short film series. In 2008, she headed and instructed the first Fresh Films Emerging Screenwriters program, and became the Head Writer and an Executive Producer for the film series.

Shadowed Summer is the 2010 winner of The Society of Midland Authors Book Award for Children’s Fiction, and a 2010 Edgar® Award Nominee. It was chosen as a Junior Library Guild selection, and an ALAN Pick in 2009. Her short story “Ready to Wear” was nominated for a 2007 Pushcart Prize after appearing in Vestal Review Issue 27. In July, 2007, her essay, “Rapid Cycling,” appeared in Common Ties.

Her short story, “Management” appeared in Zen Film’s anthology “Love & Sacrifice” in February, 2007, and another short, “Kissing the Dog-Faced Boy” appeared in The Summerset Review’s Spring Issue, 2007. She has also published in SmokeLong Quarterly, Edgar Literary Magazine, and The Parnassus.

Other screenwriting accomplishments include scripting Scholastic’s “Get Active with Widget” webisode “Treasure Hunt” and the 2006 Girls in the Director’s Chair image campaign (the foundation for a national PSA in association with Women in Film.) In 2005, she concept-designed and scripted the Metro Chicago United Way’s Leadership Campaign. Her first feature film, Revenge Ends, will debut on the festival circuit in 2008.

“No. 72” and “The Super Dupers” were selected to premiere at the Los Angeles International Short Film Festival. These festivals are recognized by the Academy of Motion Picture Arts and Sciences as Academy AwardTM qualifying events. Also in 2006, the 10th annual Webby Awards named Fresh Films an official honoree.

In other arenas, Ms. Mitchell was interviewed by the New York Times and the BBC for her part in exposing the Kaycee Nicole hoax, and she’s been tapped by morning radio shows all over the United States as a guest expert on Urban Legends & Folklore.