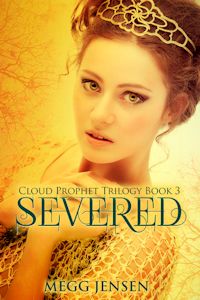 Reychel knows her gift of prophecy will lead to madness and now she is at her most vulnerable. The enemy army will attempt to sever her from everything she's ever known: her homeland, her friends, Mark, and her gift. Even at her weakest, she refuses to give up on her desire to end the war between the Malborn and the Serenians. Reychel would do anything, even come back from the dead, to conquer the enemy and reunite with Mark.

Severed is the last of the Cloud Prophet trilogy, and my favorite!  The mystery and intrigue are at a fever pitch in this novel, keeping me completely absorbed.  Reychel is a fabulous character, a former slave thrust into a life she never imagined herself a part of.  Now the fate of the world rests primarily on her shoulders and she stands to lose everything she has ever dreamed of to save her people.  She still struggles to use her gifts to help her people, even while fearing the loss of her sanity, facing impossible choices.

This book, and the entire series, is one of those that pulls you in and won’t let you go.  It is a story that stays with you even when it is finished because you have become so involved with the characters and their stories.  The dystopian world the author has created may be completely different from that of our own, but the characters are so believable that you are fully able to fall into it as if it were your own world.  This story had a little bit of everything in it:  friendship, love, betrayal, mystery, loyalty, intrigue, fear, and honor.  The characters are so well created that, at the end of the series, you feel as if you have been with them as they grew and changed within the story.

This is a fantastic series!  Definitely pick these books up!

While the series is over, there will soon be a short novella, The Initiate, that bridges this trilogy with the Swarm trilogy.  The first book of that series, Sleepers, is already available and the next one, Afterlife, will be out some time in 2012.