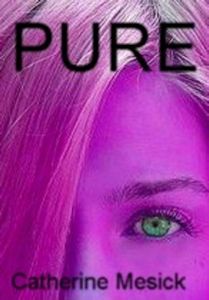 Sixteen-year-old Katie Wickliff lives quietly in the small town of Elspeth's Grove, unaware of the troubled past that forced her grandmother to flee Russia with her when Katie was only a child. When people in the town begin to disappear, and Katie's own home is attacked by a terrifying creature, Katie and her grandmother return to Russia to find answers.
Pursuing them is the handsome William – who just might be a vampire. Katie discovers that William is indeed partially a vampire, but he is also one of the Sidh, an ancient clan whose members are gifted with great power – a clan to which Katie's long-deceased mother also belonged.
Soon, Katie discovers that her mother's seemingly natural death was actually murder, and she is forced to confront the question she wants to face the least: Is William her otherworldly protector, or is he the dark creature who killed her mother eleven years ago?

Pure is the first book in the new Pure series by Catherine Mesick.  The book opens with Katie, an average teen girl dealing with nothing more pressing than an overprotective grandmother, a complicated relationship with her guy BFF and and even more complicated situation with her girl BFF.  But everything changes for Katie when people start disappearing and strange things start happening.

Katie was a great lead character, as was William, although I wish there had been a little more to him.  He was almost a little too mysterious for a lot of the story, which made it hard to like or dislike him.  Katie, however, was easily likable, an all-around good girl that didn’t come off as too sugary sweet or sanctimonious.  The story really moved for me once it moved to Russia, the location for most of the book.  The author did a great job of weaving the flavor of the country into the story without making it seem like a lecture on Russian language and culture.  There was some predictability here and there with different plot points, but not enough to take away the true suspense of the story.  Best of all was the unique twist on the vampire genre and the paranormal themes.

I had some problems with it, but I think the story is a good one and I intend to read the next in the series, too.

Author of Pure, a YA paranormal romance.