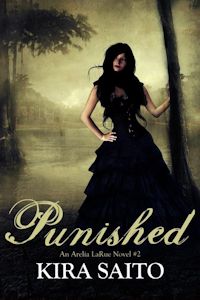 Down in New Orleans, Arelia Larue’s once ordinary life has quickly transformed into something truly extraordinary.
As her ability to communicate and work with Les Mysteries (spirits) grows, so does her attraction for Darkwood’s secretive owner Lucus LaPlante.
However, Arelia soon discovers that Darkwood’s shiny and seemingly extravagant exterior holds secrets that may put her very soul at risk.
In the intoxicating world of New Orleans voodoo/hoodoo, expect the unexpected.
Come along for the ride!

I liked this book even more than I did the first, Bound.  There was far more depth to the characters and the story was darker and richer for it.  The spirits were even more involved in this story, and Arelia’ s interactions with them really added to the book.  The love triangle between Lucas and the two girls gave some good romantic conflict, too.

I liked that Arelia, despite being a voodoo queen, was still a teenage girl with all the angst and ups and downs that go with teenhood.  She wasn’t made to be anything other than a normal girl who just happens to have extraordinary powers.

When I read this, I was absorbed into the world of magic and mystery and Darkwood Plantation.  It definitely as that Southern Gothic flair.

Unfortunately, the editing errors continued with this book.  That disappoints me more because I think Saito is a far better writer than the errors make her seem.

Some of the supporting characters didn’t seem to develop as much as the main characters and it was obvious at times.  With a limited cast of characters that remain throughout the books, supporting or not, they appear often enough that they should have developed a little more, I think.  The Dumptys got rather stagnant, and so did Sabrina.

The ending was abrupt in this book, too, something that is a bit of an awkward transition.

Much like the first, the cover art is ridicuously beautiful and totally supports the novel’s storyline.  I will most definitely be reading the next book, Possessed.