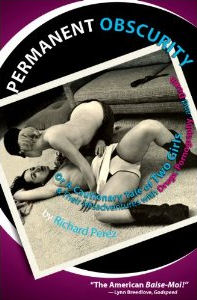 A youthful bohemian satire, a story of alienated nonconformists, a "girls on the lam" story, a sexploitation and S/M romp. Welcome to the psychosexual world of PERMANENT OBSCURITY. Inspired by the underground sexploitation films of the 1960s, this bold updating of the "roughie" subgenre largely takes place in New York City's East Village (circa 2006), and it chronicles the rise and fall of a unique and intense relationship. Dolores and Serena, two chemically dependent, down-and-out artists set out to take control of their lives by making a fetish-noir/femdom movie. Of course, things don't exactly turn out as planned.

Permanent Obscurity is written in the “as told by” style, which was perfect for the dark, psychosexual themes of the book.  The author’s disclaimer of vulgarity is accurate, but fully in keeping with the the story as it unfolds.  Set in the East Village of NYC, Dolores Santana and Serena Moon are two chemically-dependent, struggling artists whose lives are spiralling out of control.  Dolores is a photographer with a lot of skill but little ambition and motivation beyond scoring her next high.  Serena is a musician whose career just doesn’t take off in the direction that she believes it should.  With their careers and relationships a wreck and quickly running out of money, the two girls decide that making a “femdom” movie starring Serena is the answer to their financial and personal woes.  But things go horribly wrong.

With complete honesty, I did not know what to expect with this book.  It is absolutely different from anything I have ever read.  Judging from the author’s notes, I wondered if this would be more erotica than anything else.  But it most definately was not erotica.  It is a raw and gritty story, and instead of being gratuitous, the vulgarity is an integral part of the story.  Although completely outside of my own life experiences, the stories of the two women, particularly Dolores, were gripping and surprisingly relatable in a lot of ways.  The imagery used is graphic and real and you felt as if you were a part of the story as it unfolded.  Yes, parts of the book were more than a little uncomfortable, but that is exactly how it should have been.  This is not a feel good book, but it does explore some very real issues.  I did not expect to enjoy it, but I really did.

« The Girl Who Chased the Moon
Jenny Pox »