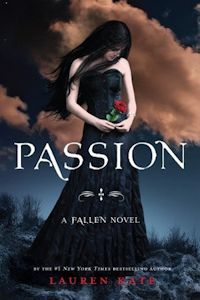 Luce would die for Daniel.

And she has. Over and over again. Throughout time, Luce and Daniel have found each other, only to be painfully torn apart: Luce dead, Daniel left broken and alone. But perhaps it doesn't need to be that way. . . .

Luce is certain that something--or someone--in a past life can help her in her present one. So she begins the most important journey of this lifetime . . . going back eternities to witness firsthand her romances with Daniel . . . and finally unlock the key to making their love last.

Cam and the legions of angels and Outcasts are desperate to catch Luce, but none are as frantic as Daniel. He chases Luce through their shared pasts, terrified of what might happen if she rewrites history. Because their romance for the ages could go up in flames . . . forever.

The third book in the Fallen series, Passion was very different than the first two books.  Unlike those, this book didn’t tell a single story.  Instead, it followed Luce throughout many of the stories of her lifetimes, travelling ever farther back in order to learn the truth about herself, about Daniel, and about their love.  It was an interesting technique to fill in the missing pieces that the previous books left missing.  The first two books left vague the back stories of Daniel and the angels and this book went a long way to answering those questions.  It also answered much about Luce and her history, throughout time.

I was worried that the time travelling retelling of Luce’s story would get muddied or boring, but it really didn’t.  Each jump in time was almost a mini-story in itself, with each Luce being a completely different kind of person.  It was an interesting twist on reincarnation themes.  My only criticism was that it was so different in style from the first two that it almost felt as if it was a spin-off, rather than a main part of the series.  I enjoyed it, and it answered many of the questions I had about Luce and Daniel, but it just had a very different feel to it.  Not bad, just different.

I love the fact that there is no clear idea of good and bad, instead mirroring reality.  Definitely a must read series.

Next up is Fallen in Love: A Fallen Novel in Stories, a collection of 4 stories set in the Middle Ages centered around other characters in the series.  It will be out January 24, 2012.  The final book in the series, Rapture, will be out June 12, 2012.