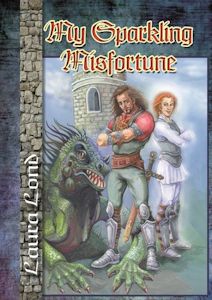 Lord Arkus of Blackriver Castle readily admits that he is a villain and sees no reason why it should stop him from being the protagonist of this book. After all, Prince Kellemar, an aspiring hero, has defeated him in a rather questionable way.

Bent on revenge, Arkus attempts to capture a powerful evil spirit who would make him nearly invincible, but a last-minute mistake leaves him with a Sparkling instead—“a goody-goody spirit that helps heroes, watches over little children, and messes up villains’ plans.”

Bound to Lord Arkus for five years of service and sworn to act in his best interests, the Sparkling is not easy to get rid of, and of course his understanding of “best interests” is quite different from what Lord Arkus has in mind.

My Sparkling Misfortune is the first in the Lakeland Knight series, and is a refreshing take on the fantasy and magic genre.  Instead of being told as a hero’s tale, it is the tale of a would-be villain.  Despite his “villain” status, Lord Arkus is a likeable character around whom the story is told.  Without those villains, there would be no heroes and villains have stories, too.  There are always two sides to a story, and this is the villain’s.

There was a great deal of humor in this story, along with mystery, magic, intrigue, danger, and action.  The humor came in unexpected places, and it often served to change the reader’s perception of the characters and their roles within the “hero/villain” framework.

I will be definitely be picking up the next in the series, My Royal Pain Quest, due out in November.

Laura Lond is an internationally published author of several novels and a collection of short stories. She has a Bachelor of Arts degree in history. Having worked for 2 years at a literary museum, Laura entered the world of business, working for large international corporations like Xerox Ltd. and Fluor Daniel. After moving from Europe to the United States, she has been self-employed as a freelancer.