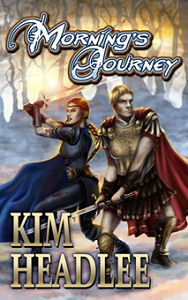 In a violent age when enemies besiege Brydein and alliances shift as swiftly as the wind, stand two remarkable leaders: the Caledonian warrior-queen Gyanhumara and her consort, Arthur the Pendragon. Their fiery love is tempered only by their conviction to forge unity between their disparate peoples. Arthur and Gyan must create an impenetrable front to protect Brydein and Caledonia from land-lusting Saxons and the marauding Angli raiders who may be massing forces in the east, near Arthur’s sister and those he has sworn to protect.

Morning’s Journey, sequel to the critically acclaimed Dawnflight, propels the reader from the heights of triumph to the depths of despair, through the struggles of some of the most fascinating characters in all of Arthurian literature. Those struggles are exacerbated by the characters’ own flawed choices. Gyan and Arthur must learn that while extending forgiveness to others may be difficult, forgiveness of self is the most excruciating—yet ultimately the most healing—step of the entire journey.

Morning’s Journey is the sequel to Dawnflight and my favorite of the two!  This series is an epic tale of Arthurian mythology.  What I love most about this series is that the characters are created in new ways.  The cast of characters are those with whom all lovers of Arthurian literature are familiar, but presented in a completely different way.  It is the alternate reality version of mythology!  And it is one that is definitely a bit darker and grittier than most!

I love a book that can push its way into my head and keep me hooked.  This book did this for me, even more than the first.  It picks up right after Dawnflight ends, and right into the midst of Gyan’s nightmare, predicting Urien’s win.  It was a dramatic, and bloody, start to the ongoing sage of Arthur and Gyan!  There are a lot of these heart-pounding, full of anticipation scenes, the kind of scenes that keep you turning the pages.

Being a student of mythology, I can thoroughly appreciate the sheer amount of research that the author has done with this series.  The weaving of myth and history is beautiful to read, and seamlessly done.  I love, love, love the blending of myths from different cultures, and this author is an expert at doing so! For lovers of Arthurian stories, a definite must read.  However, you should most definitely read Dawnflight first as these truly are an epic saga from one book to the next.

One response to “Morning’s Journey”