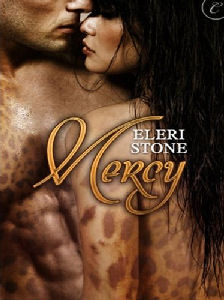 To the Yaguara, an ancient jaguar shape-shifting people living deep in the Amazon jungle, nothing matters more than strength. Iada is their champion; genetically pure, she has been trained since birth to fight. Her destiny is to become the next Queen of the Yaguara by winning the tournament of succession a battle to the death.Her opponent is Gabriel, a half-blooded outcast whose mother was human. To everyone's shock, he defeats Iada but does not strike the death blow instead, he extends mercy, thereby claiming her as his mate. Despite their enmity, the attraction between them is powerful, and soon they are mates in more than name only. Their mutual distrust serves only to fuel their passion two champions bested only by their overpowering desire for each other. But Gabriel has an agenda that threatens the most basic tenets of Yaguara society and that will force Iada to choose between her people or her King.

Mercy opened with Iada preparing for what could be the fight of her life.  The former king dead, Iada has been groomed since she was a little girl for the fight that would make her the next Queen of the Yaguara.  The Yaguara are a secret tribe of shape-shifting jaguars in the Amazon jungle who value nothing as much as they do strength.  To them, anyone other than a genetically pure shifter is not worth anything.  Yaguara who mate with humans or mutants are exiled without a second thought.  But Iada faces her opponent for the crown, a half-blooded “mutant” whose mother was human.  To everyone’s surprise, he defeats the previously undefeated Iada but doesn’t deliver the death blow.  Instead he claims his right to give her mercy AND make her his mate, his Queen.  Iada’s uncles, Vin and Arturo, who seemingly rule the Yaguara from behind the scenes, immediately plot to remove the outcast as their King, feeling no issue with using Iada to further their agenda.  Coming from two totally different sides of their culture, Iada and Gabriel. distrust each other’s motives throughout the story, causing no end of conflict.

The story was intriguing from the opening scene.  At first, I was drawn to Iada as the strong and powerful warrior woman, but as the story developed, I found Gabriel to be the more relatable character with his softer, clearly more human side.  In fact, I began to be annoyed with Iada for her willingness to submit to Gabriel sexually, despite her confusion about her choices.  There were times when the sexuality between them seemed almost degrading to her as a woman.  But as the story progressed, and I learned more about Iada’s past and her upbringing, her behavior became more understandable.  It also made her far more relatable as well.  I think that the distance that the reader feels from Iada is necessary to fully develop her character, to allow the reader to understand how much her past affected her and her thoughts and her behavior.  This was really an enjoyable novella, with some very interesting themes and conflicts between good and evil.  I definately recommend it.

Eleri Stone was born and raised in New Jersey. She graduated from the University of Iowa, married her college sweetheart, and settled in the Midwest where she still lives with her husband and their three children. A lifelong fan of fantasy, she started reading romance as an adult and was instantly captivated by the strong female protagonists and character-driven storylines. All of her stories have some element of speculative fiction and they all end with a happy-ever-after.