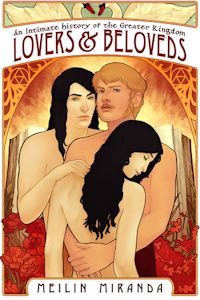 A trapped immortal planning escape...
A prince who is the key...
And a secret, seductive history, captured in a magic book...

Just turned 18, Prince Temmin Antremont has finally joined his father's court, only to walk straight into a power struggle between the secular and the sacred. The twin gods of love and sex call Temmin to serve in the Lovers' Temple for two years, a call made even more tempting by the seductive twins who embody the gods.

Prophecy suggests that Temmin's entrance into the Temple spells the kingdom's end, and the King will stop at nothing to prevent it. But the king's own advisor, a strange immortal called Teacher, comes to Temmin's aid. Why? And does the kingdom's fate really hinge on one young man's decision?

Lovers and Beloveds is the first of a series, An Intimate History of the Greater Kingdom.  When I received the book and read a little about it, I thought it was going to be a fantasy/steampunk kind of mix, and I was not even in the ball park!  It is at it’s core a fantasy novel, with an erotic theme.  While the eroticism does play a major part in the story, there is so much more to it than that.  The characters and the world in which they lived were equally well-developed and that balanced the eroticism, making the story very engrossing.  While definately based in a fantasy world, the Temples in the novel echoed the Ancient Greek religions, and the nobles seemed almost Victorian.  I really liked that mix of historical elements.  I also loved the “story within a story” technique used to tell the stories of Temmin and that of his ancestor Warin.

Temmin wasn’t always the most likeable character within the story, but he was very easy to relate to.  A big part of the story is really a coming of age tale for him, both personally and in his destiny to be the future King.  His struggle to grow up, to become a man and to know who and what he really was as a person was what kept me fully in the story.  But the supporting characters were just as well thought out as he was, Teacher being my favorite,  There is a lot of mystery about him and I hope we get more of him in future books in the story. This is definately not a book for a younger crowd, or for those who don’t like erotica, but for those on the fence about it, don’t let the erotica put you off.  That is a part of the story yes, but there is so much more to the story that is to be enjoyed.  I will definately be reading future books in the series.

MeiLin Miranda writes Victorianesque fantasy and science fiction from her 130-year-old house in Portland, Oregon. Her love of all things 19th century (except for the pesky parts like cholera, child labor, slavery and no rights for women) has consumed her since childhood, when she fell in a stack of Louisa May Alcott and never got up. Her work has appeared in the anthologies Other Sides and Allegories of the Tarot, and will appear in the upcoming collection Synchronic.

MeiLin has been a professional writer for most of the last 35 years, focusing on nonfiction until a cardiac arrest and near death experience in 2006 convinced her she’d better get moving if she meant to write fiction.

Currently, she works on the fantasy series “An Intimate History of the Greater Kingdom” and the online fantasy western serial “Scryer’s Gulch,” and is a co-creator of the shared steampunk fantasy series “The Drifting Isle Chronicles.” She lives with a husband, two kids, two cats, a floppy dog and far, far too much yarn.

2 responses to “Lovers and Beloveds”