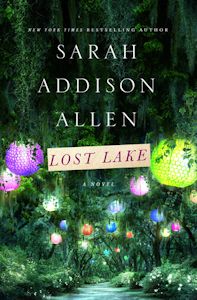 Suley, Georgia, is home to Lost Lake Cottages and not much else. Which is why it's the perfect place for newly-widowed Kate and her eccentric eight-year-old daughter Devin to heal. Kate spent one memorable childhood summer at Lost Lake, had her first almost-kiss at Lost Lake, and met a boy named Wes at Lost Lake. It was a place for dreaming. But Kate doesn't believe in dreams anymore, and her Aunt Eby, Lost Lake's owner, wants to sell the place and move on. Lost Lake's magic is gone. As Kate discovers that time has a way of standing still at Lost Lake can she bring the cottages—and her heart—back to life? Because sometimes the things you love have a funny way of turning up again. And sometimes you never even know they were lost . . . until they are found.

Lost Lake is the first book the author has written since her bout with cancer, a fight she lived very publicly through her social media.  It was much anticipated and, I think, that much more wonderful to read.  This book was as beautifully written as anything and everything Sarah Addison Allen has written!  The stories that she creates are not light, not about perfect lives.  There are real issues of sadness and despair and confusion and uncertainty.  They are about real life.  They are also incredibly heartwarming and touching, with just enough magical realism to add a touch of whimsy.

This book is more than the story of Kate, or of Devin, or of Eby, or of Wes, or of any of the other characters.  It is their story, separately and collectively.  Each of them has their own story, their own hurts, their own problems. They are so wonderfully ecccentric:  the free-spirited child, the mute French cook, the aging, seductress, the older widow, the younger widow, the podiatrist, the handyman, the former professor.  Their age range is unusually vast, from Kate’s young daughter to Buhladeen in her eighties.  But it is at Lost Lake that they all come together as their own sort of family to heal and to help each other.