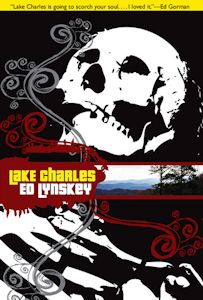 Brendan Fishback coming home from a rock concert ends up the next morning in bed with a corpse, his dead girlfriend Ashleigh Sizemore. He has no idea how she died. But the local sheriff closing in targets Brendan as the prime suspect for Ashleigh’s murder. Time is running tight.Going on a Lake Charles outing with his twin sister Edna and best pal Cobb Kuzawa, Brendan mulls things over.

That night when Edna turns up missing, Brendan and Cobb take off to find her. Events heat up after they stumble on a well-guarded pot farm. Blood spills in the violent clash. Staying one jump ahead of the local authorities and an enraged drug cartel, Brendan picks up unexpected aid.

Cobb’s dad Jeremiah is a decorated Korean War vet and ex-CIA operative who applies his own rough ideas of justice. Veera Grant, a tough lady DEA agent working under cover, also joins in Cobb’s quest for the truth. Told in a stylish, taut prose, LAKE CHARLES set in the vibrant Great Smoky Mountains tells how a young man when pushed to the extreme defends himself against overwhelming forces on both sides of the law--and wins, but on his own terms.

Lake Charles is the soon to be released standalone novel from Ed Lynskey.  I had not read anything by this author prior to this book and I very much enjoyed it.  Set in 1979 in the midst of the gas crisis and the Iran situation, the story brought me back to the time, just a few years younger than Brendan, Edna and Cobb were in the time of the story.  I was immediately drawn into the story and I really did not want to put it down.  The action was non-stop, with twists and turns throughout the book that left me always guessing, always wondering.

I really enjoyed the voice of the story, told in the first person by Brendan.  Sometimes tales told in the first person tend to be overly polished, the language not really fitting the character telling it.  This was definately not the case with this novel.  The tone of the words used were directly in keeping with the character of Brendan, making the entire story much more realistic.  The characters were very different from one another, and that made the story very rich in texture and very interesting.  There were many times throughout the story when I was sure I had a read on a particular character, only to be proven wrong further in the story line! The entire story was very engaging, and even towards the end of the book, when you already knew “whodunit”, there were still surprises and unexpected twists that kept you guessing until the very end.  I highly recommend this read!

Ed Lynskey writes crime fiction and is the author of the P.I. Frank Johnson Mystery Series and the Isabel and Alma Trumbo Cozy Mystery Series.