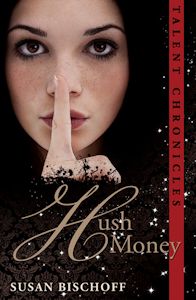 They call their abilities Talents, and that’s what they call themselves as well. Talents are people born with supernatural powers, feared by the population at large. Possession of an “unregistered ability” has become illegal, and those who are discovered are forcibly removed to government-run research facilities. For Talents, keeping their secret is the most important thing in their lives. For some, that need for secrecy begins to define who they are.

That’s how it is for Joss, a high school girl who does everything in her power to go unnoticed. She's incredibly bright, but strives to maintain grades that are good yet not too good. She doesn't participate in school activities, keeps quiet in class, eats by herself. Despite her longtime crush on Dylan, she wouldn't even think about trying to talk to him. Joss doesn't make friends of any kind, because friends can draw attention, friends can make you slip up, friends can make things complicated.

When new girl, Kat, steps in to rescue Joss from an uncomfortable situation with Marco, the class jerk, she doesn’t realize what she’s getting into, and it blows up in her face. Joss finds herself torn between a desire to do the right thing, to find some way to help a girl who was kind to her; and her need to mind her own business and fade into. For the first time, Joss begins to question the way she operates, and starts to long for connections with other people--especially a connection with Dylan, who's finally starting to talk to her.

But what's up with Dylan's sudden interest? As Marco’s best friend, can he be trusted at all?

It's bad enough when a girl's got to worry about friends, boys, over-protective dads, and shoes that pinch, but when you throw in blackmail, government agents with guns, and really annoying little sisters...that's just about too much to handle, even for a girl with an ass-kicking superpower.

Hush Money is the first novel in a new series, The Talent Chronicles.  It is set in a world people with supernatural abilities, known as “Talents”, are taken and forced into government prisons.  These prisons are vaguely veiled as state-run schools that are supposed to help teach the Talented to control their abilities.  Being an unregistered Talent is illegal, so those with them live in a constant state of fear, not knowing who to trust.  Because of that, Joss has spent her entire life having to guard herself against anything and anyone that might expose her family’s secrets.

I really liked the premise of this book, teenage heroes with superhero-style powers.  The characters were extremely well-developed, completely three-dimensional in their believability and relatibility.  Thanks to her lifelong habit of distancing herself from her peers, Joss was socially awkward and the internal dialogue the author used for her only helped to further that trait.  As a reader, I could feel her angst over normal teen girl issues, her stress about being different and having to hide so much of herself.  Dylan, the bad boy with a heart, was the perfect counterpoint to Joss.  He was a little dark and brooding, with a penchant for trouble.  But he was also a good person at heart, one who was caught up in something bigger than he was, not noticing until it had gone too far.  Too many times, the supporting characters tend to get a little neglected in character development, but this was definately not the case in this book.  As the story unfoded, the reader gets to know each of them, understanding them and how they got to the place that they are within the plot.

The plot was decently paced, never dragging for me or going so fast as to become confusing.  The unexpected twists and turns, and the occasional dark drama here and there, kept me intrigued.  I enjoyed the entire novel, with only the ending causing me any pause.  It was good ending, with the proper amount of questions answered and left unanswered.  But it felt a little rushed, a little abrupt, but that could also very well have been my complete interest in the story and what happens next to Joss, Dylan, and their friends! This is a great start to a promising new series!!

I’m just a girl who wants superhero romance! Is that so much to ask? Why must it always be a tragedy? Why does Angel walk away? Why does Spike—what did happen to Spike? Why did Wonder Woman go back home after the end of season 1 and WWII, then come back, work with Steve Trevor’s grandson, and still not hook up? Seriously! And let’s not even talk about Superman Returns, ok? Let’s. Just. Not.