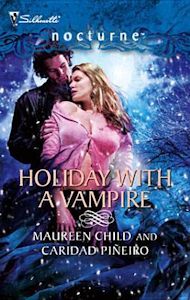 'TIS THE SEASON TO TAKE A WALK ON THE DARK SIDE...

Silhouette Nocturne is proud to present these two sensual, heartwarming tales of love during the holiday season. True, the heroes may not wear red suits or be very jolly. But tall, dark and handsome, with the unusual power to thrill, can sometimes be the best gift of all.

In Christmas Cravings by Maureen Child, a vampire finds himself in need of a miracle, and discovers it on the doorstep of his childhood home in the form of Theresa Franklin.

Most women dream of being swept off their feet by a man--not whisked away by a devastatingly handsome vampire. But for Connie Morales in Fate Calls by Caridad Pineiro, Hadrian's tempting kisses make her long to deliver the gift of life to a man who thinks he has no soul...

Because this volume contains two stories by two different authors, both will be reviewed separately.

In Christmas Cravings, when Grayson Stone returns to rural Wyoming for his annual Christmas visit, he discovers that the home he built with his own hands over a century ago has a new owner.  Not knowing who or what he was, and with baggage of her own, Tessa takes him in and helps him in his time of need.  Neither one of them expected the holiday to change their lives.

There was much about Tessa that I identified with and I enjoyed the way her personna was developed throughout the story.  I loved her strength and her unwillingness to give up when her past continues to haunt her.  Grayson’s character was equally well developed, and the two of them together was entirely believable.  The storyline was more than just the standard “boy meets girl”, “they overcome some obstacles” and everything turns out great.  There was action, several subplots and enough twists and turns to fully tell their story, even though it was a novella.

It was a fun read with substance and I would recommend it for a quick holiday read.

In Fate Calls, Connie Morales was a young, up and coming lawyer who replaced the loneliness of her personal life with her professional life.  She had ambitions and she worked hard to see them come to fruition, but part of her wanted the love and the family that her siblings had.  When she volunteered to be a street corner Santa for charity, she never expected the change it would bring to her life.

I truly wanted to enjoy this novella but the general tone of it really put me off of it.  It was well-written and the characters were developed well technically, but the plot left me cold.  The lack of control and power that Connie had bothered me, as did the fact that Hadrian essentially forced her to bend to his will.  The flashbacks were intended to illuminate the reader as to why he had become the way he was, but for me, it didn’t adequately excuse his behavior.  The ending seemed almost desperate to me, like Connie felt so much like her biological clock was ticking that she would accept second-rate treatment.

While the story left me wanting, it could very well appeal to someone else.  It was well written; it was just the content that didn’t appeal to me.

NY Times and USA Today Bestseller Caridad Pineiro is a Jersey Girl who just wants to write, travel, and spend more time with family and friends. Caridad is the author of over 40 novels/novellas and loves romance novels, super heroes, TV and cooking. Caridad writes dark and sexy romantic suspense and paranormal romances for those who live to love on the edge. Her sweet, but still naughty side, Charity Pineiro, writes contemporary romances packed with emotion and humor.

USA Today best selling author Maureen Child is the author of more than ninety romance novels and novellas. Maureen is a five time nominee for the prestigious Rita award from Romance Writers of America.

One of her novels, A POCKETFUL OF PARADISE, was made into a CBS-TV movie called The Soul Collector, starring Melissa Gilbert, Bruce Greenwood and Ossie Davis.

Maureen was not only on the Texas set to watch her characters come to life in front of the cameras, she was also tossed into the last scene by her husband and the producer, who both thought this would be a fun way to humiliate an author!

When her kids were small, Maureen started writing as not only a way to stay sane, but in the hopes of finding a job she could do and stay at home with them. Sanity is still an issue, but she did manage to write her way into a career she wouldn’t trade for anything.

Over the years, she’s written under lots of different names and she prefers the term ‘pseudonym’ to ‘alias’. As Ann Carberry, she wrote western historical romances. As Kathleen Kane, she wrote not only Americana romances, but western paranormal romances as well. As Sarah Hart, she wrote one really spectacular western paranormal that is still one of her favorites. And once, Ann Carberry even wrote a Victorian historical which she absolutely loved doing.

Life is busy but when she isn’t writing you can find Maureen sitting under her ‘thinking tree’, coming up with new ideas for even more stories. When she isn’t dreaming up a new book or writing a current one, Maureen loves to travel. Her favorite vacation spot is Ireland, with Scotland coming in a very close second. She and her husband love a good road trip and Maureen’s looking forward to the day when she can actually drive to Ireland. Talk about the best of both worlds!

Maureen Child is a native Southern Californian who has recently moved with her family to the mountains of Utah where she’s learning to deal with snow on the road and deer in the yard. 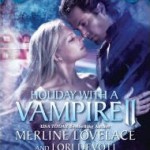 « The Pirate Queen
Holiday with a Vampire II »