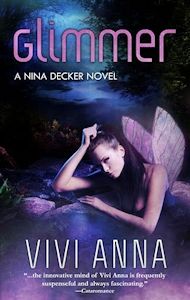 Although Nina Decker's father is one hundred percent human, her mother is not. She belongs to an ancient and rare race of people called the fae. But these fae are not those written about in fairytales, with pretty gossamer wings and fairy dust, no they are sinister, malevolent and unkind, dwelling in another realm called Nightfall. More prone to destroy than to create. Abandoned at the age of ten, to be raised by her father, Nina has never forgiven her mother for that or for ruining her father. A man of only sixty, he appears to be closer to eighty with a frail body and mind. He's been fae-struck and is slowly fading away to nothing. This is one of the reasons why Nina has never gotten too close to any one man. She doesn't want to seal his fate like her father's has been.

But she can't deny her fiery connection to Severin Saint Morgan, a sexy as hell werewolf and the alpha of the Vancouver wolf pack. He's an Australian immigrant working at the university as an associate professor, and the publicized face of the werewolf species. He makes her blood boil with desire and makes her tremble with fear. But its only when her mother reappears with startling revelations about an upcoming war between the fae and the werewolves that Nina realizes that she may be a pawn for both sides.

I was engrossed in Glimmer from the moment I started it!  Nina Decker is an emergency room nurse with a potentially dangerous secret that she has kept for her entire life. After the fallout when werewolves let their existence be known, she is more determined than ever to keep her secret from being discovered. After an unexpected meeting with the Alpha of the local werewolves, Severin, Nina’s life begins to spiral out of control as everything she knows begins to turn upside down.  The story line was intriguing, with lots of action and unexpected twists and turns.

Nina and Severin were not only an extremely sexy couple, but each of their characters individually were just as interesting.  Nina struggles with her own humanity and the dislike of her own dark fae heritage, but has no problem accepting Severin and the werewolves as supernatural beings.  Severin clearly has reasons for helping Nina that we don’t fully know yet, but in the face of his own pack, he cares for her.  I love the fact that the characters aren’t perfect, but flawed, with no clear leaning to either “good” or “evil”, leaving the way clear to more novels in the series  The cliffhanger left me definately wanting to read more! I definitely recommend picking this up!

A BAD GIRL at heart, Vivi Anna likes to burn up the pages with her original unique brand of fantasy fiction. Whether it’s in ancient Egypt, or in an apocalyptic future, Vivi always writes fast paced action-adventure with strong independent women that can kick some butt, and dark delicious heroes to kill for.
Once shot at while repossessing a car, Vivi decided that maybe her life needed a change. The first time she picked up a pen and put words to paper, she knew she had found her heart. Within two paragraphs, she realized she could write about getting into all sorts of trouble without suffering the consequences.
When Vivi isn’t writing, you can find her causing a ruckus at downtown bistros, flea markets, or playgrounds.

« The Fire Inside
Anyone Can Die »