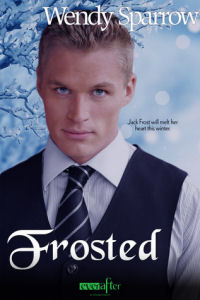 Seven years ago, Kate Finley fell through the ice into the Winter World and straight into the heart of its king, Jack Frost. Then cold feet set in and Kate ran from the one man who made her feel complete. Jack let his queen go back to the mortal world to say goodbye but she escaped out of his reach to sunny Florida. Now time is short, and he must convince his runaway bride to give him a second chance to melt her heart.

Until Frosted, my vision of Jack Frost was more like Martin Short in The Santa Clause 3, rather than a blonde, sexy hot guy.  Jack Frost, an unexpected marriage to a mortal, estrangement, and a runaway bride?  I had no idea how this was going to play out when I picked up this book, but it did, and it did well!

Kate and Jack were both fabulous main characters, frustrating as anything at times!  Kate was terrified of love and commitment and Jack wasn’t doing a very good job of showing his love.  Kate was emotionally scarred and Jack hadn’t truly had a life for most of his existence.  All of that combined made them fascinating, and frustrating.  But as the story progressed and we learned more about them, it made it that much easier to fall in love with them both!

An absolute must read if you love good romance, a bit of heat, and a happy ending!

Wendy’s childhood as a military brat instilled in her a wanderlust to travel, but with the possibility of bugs, lost luggage, germs, a lack of parking, she just prefers the cleaner and safer visits to exciting places in her stories. It has very little to do with her obsessive compulsive disorder—maybe. She is a passionate advocate both online and in her community for the welfare of autistic children. In addition to writing, she enjoys painting and sketching, spending time with her two quirky kids, and running with her dog. Her wonderful husband makes sure she has the geeky, tech aspects of her stories just right. She can often be found on Twitter where she will strike up a conversation with anyone she happens across.