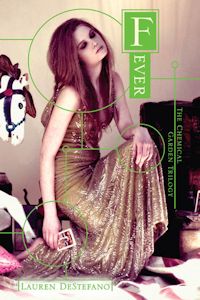 Rhine and Gabriel have escaped the mansion, but danger is never far behind.
Running away brings Rhine and Gabriel right into a trap, in the form of a twisted carnival whose ringmistress keeps watch over a menagerie of girls. Just as Rhine uncovers what plans await her, her fortune turns again. With Gabriel at her side, Rhine travels through an environment as grim as the one she left a year ago - surroundings that mirror her own feelings of fear and hopelessness.
The two are determined to get to Manhattan, to relative safety with Rhine’s twin brother, Rowan. But the road there is long and perilous - and in a world where young women only live to age twenty and young men die at twenty-five, time is precious. Worse still, they can’t seem to elude Rhine’s father-in-law, Vaughn, who is determined to bring Rhine back to the mansion...by any means necessary.
In the sequel to Lauren DeStefano’s harrowing Wither, Rhine must decide if freedom is worth the price - now that she has more to lose than ever.

The America of The Chemical Garden is absolutely chilling.  DeStefano has created a world that may be a dystopian future, but it is one that is entirely believable.  The  world has changed drastically from what it once was, from the world as we know it now.  But, as much as it has changed, there are some things that remain, even if they have been warped by the new world and its new needs.  It is a world of fear and sadness and the inevitability of a shortened lifespan.  Yet throughout this book, and the others in the series, there is the never ending thread of hope and humanity.

This series is an engrossing one, with fabulous characters and story lines that make you, as a reader, think.  The characters are all very different people, all with stories of their own.  Some of them you love and some of them you just love to hate.  But they are characters that often challenge you and your values, your thinking.  There are moments throughout the books when various characters act in somewhat questionable ways and, at first, it is easy to judge them.  But when you put it in the context of the chaotic world they live in, it makes you wonder what you yourself would do in the very same situation.  It is a book with definite messages, but it is done in such a way that there is absolutely no feeling of being lectured.  Instead, you have a book that is somehow beautiful, even set in a world of despair, darkness, and fear.  One of the major questions I found myself asking was whether freedom was worth the things that Rhine and Gabriel had to go through?

You definitely need to read Wither first, but this is an absolutely wonderful read!