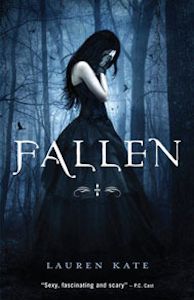 Mysterious and aloof, he captures Luce Price's attention from the moment she sees him on her first day at the Sword & Cross boarding school in sultry Savannah, Georgia. He's the one bright spot in a place where cell phones are forbidden, the other students are all screw-ups, and security cameras watch every move.

Even though Daniel wants nothing to do with Luce--and goes out of his way to make that very clear--she can't let it go. Drawn to him like a moth to a flame, she has to find out what Daniel is so desperate to keep secret . . . even if it kills her.

The first in the young adult paranormal Fallen series, Fallen is a contemporary retelling of the age-old, epic battle between good and evil.  The premise of the plot was creative and unique, set around a reform school with the unlikeliest of heroes and villians.  Sorting out the evil from the good was rarely possible and kept me engaged, but at times it seemed a little too tangled, a little muddy.  I liked Kate’s writing style, although there were some awkward pieces of dialogue and a few contradictory descriptions that pulled me out of the story a little.  The characters were quirky and added interest to the story with their uniqueness.  A cast of juvenile delinquents that are neither clearly good nor clearly evil and a reform school are not the usual elements of a “fallen angel” story and I think that made for a better story.  Fallen is the first of a series so I didn’t expect the story to unfold too quickly, nor did I expect to have all of my questions answered at the conclusion.  However, I think the ending almost raised more questions than it answered, even with subsequent stories to come.  At the end of the main story, clear lines were drawn.  But the epilogue changed that, and the lines were blurred once again.  Instead of being an excellent cliffhanger leading me to the next book, it left me feeling a little muddled.   That being said, I did enjoy the book, and I am definately looking forward to the next novel.

The cover art, however, is absolutely stunning and is admittedly what drew me to the novel in the first place.  I am a sucker for slightly dark art and it really appealed to me. I had some issues, but the story was more than enough overall to make me want to continue reading this series.