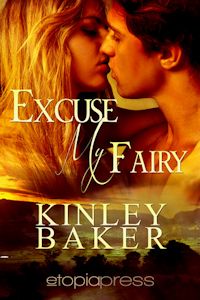 Draybeth is broken. Her fairy powers don’t work, her magic is completely dysfunctional, and not even her bad attitude and soft heart can win her back into Fairy favor. Exiled from their land, she struggles to make a life for herself in the human world. But when her bar burns to the ground and she meets one of the Impassables--the devastating Lawman Barrett--things become even more of a struggle. An arrest, murder, and abduction challenge everything she’s worked for, and worse, the Impassable Lawman appears to be her destined mate. But darkness stirs deep within Dray’s heart, and she’s not about to drag the gorgeous lawman down with her.

Barrett never expected to find himself mated to a fairy, let alone one with such a wicked temper and a short fuse. Being an Impassable, he should be immune to fairy magic, but Dray’s magic burns through him like lightning, just as everything else about her ignites him, body and soul. The fairy’s power over Impassables threatens everything this new realm was built upon, and as a Lawman, Barrett’s job is to make sure those threats are eliminated. But his feelings for Dray make him question just where his duty lies.

Excuse My Fairy is the first in the brand new Misbehaving Magics series by Kinley Baker.  I had never read anything by this author and had no idea what to expect.  A fairy tale, dark fairies, romance… anything could be possible with a fairy-themed book.  I truly loved the take on fairies that the author took with this story.  There are no happy, flighty fairies in this book!  It takes place in almost a post-apocalyptic world, in many ways much more futuristic than our own.  But there was just enough that was reminiscent of our own world and time that it made visualizing Dray’s world easy.  Dray is no Tinkerbell fairy, but a badass who has had to live a life she was never intended to live.  Badass she might have been, but there was a soft side to Dray that made me want to reach into the book, pull her out, and make her a cup of tea to make it all better!

At first, I felt like the romance between Barrett and Dray built crazy fast, but that is the nature of bonding with a mate in a world of fantasy.  It fit the story, if not real life and the fact that they both fought it a bit made it much more believable, fairy bonds or not.  I appreciated the attention to detail that the author gave to describing the environment, doing it without muddying the story with endless descriptions while making it easy to see.  I also liked that the less central characters were just as interesting.  Jiva was a great character with a story of her own that I am hoping we will someday learn in subsequent books.  I have a suspicion about the back story of Barrett’s captain and I am waiting anxiously for more in this series to see if I am right!