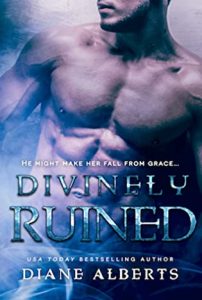 She finally meets a decent man–after she’s oath-bound never to touch men again!
Rebecca’s life sucked before she became an angel. Crappy apartment, awful jobs, abusive boyfriends–it was no wonder she jumped at the chance to escape it all and become a real live angel. The problem is Rebecca’s not very angelic, and she’ll have to do more to earn her wings than end her love affair with the word f–er, frick.
Especially when she’s assigned to save single father Tony Weis, whose less-than-pure thoughts wreak hell on a telepathic angel’s nerves. It’s all Rebecca can do to keep her hands off him…but when she loses her memory injuring herself to save Tony’s daughter, now it’s Tony’s turn to be her angel and care for her. But will Tony’s devotion tempt her from her angelic path, even if it means being human again?

Divinely Ruined is the first in a new trilogy, Divine Temptations, by author Diane Alberts.  I was excited to be asked to review this book because the concept was new and different from anything I have read.  This was a fantastic book that I truly enjoyed reading.  It was a fresh new take on both the romance genre and the angel/godmother theme, and it was extremely well done.

Rebecca is anything but typical angel material, which I loved.  She was real, sometimes pretty dark, and that made her all the more lovable as a character.  It wasn’t all sunshine and clouds with her, but a real life with real pain.  Tony, too, had his dark moments and painful past.  The two together are an seemingly an unlikely pair, but a perfect one.  There were moments that were absolutely giggle-worthy, and just as many that made you want to wrap your arms around them and take away the pain.  This is a book that covers a whole rollercoaster of emotions and makes you feel them all right along with the characters.

I couldn’t put this book down and I can’t wait for the next one!

Diane Alberts is a multi-published, bestselling contemporary romance author with Entangled Publishing. She also writes New York Times and USA Today bestselling new adult books under the name Jen McLaughlin. She’s hit the Top 100 lists on Amazon and Barnes and Noble numerous times with numerous titles. Diane is represented by Louise Fury at The Bent Agency. Her goal is to write so many fantastic stories that even a non-romance reader will know her name.

Diane has always been a dreamer with a vivid imagination, but it wasn’t until 2011 that she put her pen where her brain was, and became a published author. Since receiving her first contract offer, she has yet to stop writing. Though she lives in the mountains, she really wishes she was surrounded by a hot, sunny beach with crystal clear water. She lives in Northeast Pennsylvania with her four kids, a husband, a schnauzer mutt, and a cat. In the rare moments when she’s not writing, she can usually be found hunched over one knitting project or another.