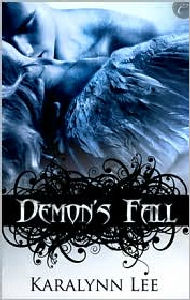 She was an angel at the gates of Hell.

When Kenan, an incubus, finds a caged angel for sale in the Hellsgate marketplace, he sees her as a challenge. Certain that his skills in seduction will work as well on a heavenly creature as they do on mortal women, he buys Jahel, intent on having her soul as a novelty in his collection.

Knowing he must gain Jahel's trust if she is to come to his bed willingly, Kenan treats her more as his guest than as his slave. When she reveals what brought her to the mouth of Hell in the first place—retrieving the soul of a young girl she was guarding—he even offers to help her complete her mission.

Though he has promised Jahel freedom, Kenan soon realizes she has captured his heart instead. And as their passion for one another grows, they find themselves caught in a struggle between Heaven and Hell, one that will lead them to the very edge of the apocalypse...

The novel opens with Jahel, an angel, in the last place you would expect to find an angel, trapped in a cage, ready to be sold to whomever pays the right price.   She has been captured in Hellsgate, a city populated by demons and lost mortals, caught between the mortal realm and Hell itself.  She came to Hellsgate to find the soul of her former charge, feeling she failed to guard her.  Instead, she found herself being purchased by a demon, an incubus named Kenan who, unbeknownst to her, plans to seduce her and steal her soul to add to his collection.  Instead, he helps her, falls in love with her, and breaks all the rules in order to protect her.

Too many times, in novels with the theme of good versus evil, one or both sides are too much, either too good or too evil.  For a mere mortal such as I, I know that rarely is anyone purely good or purely evil.  I very much liked that in Demon’s Fall, the author created a whole world, one in which there are shades of grey.  In essence, both Jahel and Kenan have very much the same role, to collect souls, just for different ends.  The interplay between the angel and the demon as they fell in love was interesting as the themes of good versus evil was shown in a way that made it seem as if it were coming from it’s own pantheon or belief system, rather than using the traditional Christian views.

Karalynn spent most of her childhood in a country where she didn’t speak the language, and instead of sensibly learning it, buried herself in books. Thanks to the shortage of reading material in English, she began penning her own tales. She discovered her identity as a romance writer when the characters in her stories invariably began pursuing love interests instead of focusing on the plot.

She lives in Silicon Valley and camouflages herself as a geek, writing code by day and fiction by night. Between, she’s as likely to be found at the symphony as in a pub watching football — either kind. (Be warned, she’s a beer snob.)

Her favorite authors include Patricia McKillip, for her heart-breakingly lyrical descriptions and touches of subtle humor; Barbara Hambly, for her sensical — and therefore all the more compelling — characters and settings; and Roger Zelazny, for his zany worlds and lean prose.

Her love for the semicolon sometimes must be forcibly restrained.

« The Wolven
Past Midnight »