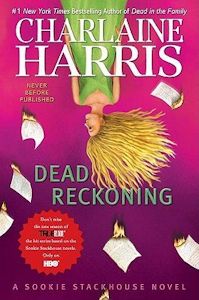 With her knack for being in trouble's way, Sookie witnesses the firebombing of Merlotte's, the bar where she works. Since Sam Merlotte is now known to be two-natured, suspicion falls immediately on the anti-shifters in the area. Sookie suspects otherwise, but her attention is divided when she realizes that her lover Eric Northman and his "child" Pam are plotting to kill the vampire who is now their master. Gradually, Sookie is drawn into the plot-which is much more complicated than she knows...

Dead Reckoning is the 11th book in the Sookie Stackhouse series, and one I have very mixed opinions about.  I love the series, as well as True Blood, but this one left me a little flat.  I love the characters, the storylines, etc., but the lack of continuity in this book in relation to the stories already told was at times glaringly obvious.  As a standalone book, it was fine, but taken as a continuation of an already established series, it lost a lot with the continuity issues.  I almost think it is a bit of a disservice to long time fans and readers of the series. While I will definately continue the series, I just hope that the same issues won’t be so obvious in the following books.  I really love the series and the stories as a whole and it is a shame.

Charlaine Harris, who has been writing mysteries for over twenty years, is a native of Mississippi. Born and raised in the Delta, she began training for her career as soon as she could hold a pencil. Though her early works consisted largely of poems about ghosts and (later) teenage angst, she began writing plays when she attended Rhodes College in Memphis, and graduated to books a few years later.
After publishing two stand-alone mysteries, Harris decided to establish a series. She began the lighthearted Aurora Teagarden books with Real Murders, which garnered an Agatha nomination. Harris’s protagonist, a diminutive Georgia librarian whose life never turns out quite the way she planned, kept Harris busy for several books, but finally Harris (and Aurora) grew restless.
The result of this restlessness was the much edgier Shakespeare series — set not in England, but in rural Arkansas. The heroine of the Shakespeare books is Lily Bard, a tough and taciturn woman whose life has been permanently reshaped by a terrible crime and its consequences. In Shakespeare’s Landlord, the first in the series, Lily is caught at a moment when the shell she’s built around herself is just beginning to crack, and the books capture Lily’s emotional re-entry into the world, while also being sound mysteries.
Harris’s latest venture is a series about a telepathic barmaid in southern Louisiana. The first book in the series, Dead Until Dark, won the Anthony for best paperback mystery of 2001. Each book about Sookie Stackhouse (and her dealings with vampires and werewolves and other creatures of the night) has gathered more readers to enjoy the books’ unique blend of mystery, humor, romance, and the supernatural. The Sookie books are also being read in Japan, Spain, Greece, and Great Britain.
In addition to her work as a writer, Harris is married and the mother to three children. A former weight lifter and karate student, she is an avid reader and cinemaphile. She is a member of the vestry of St. James Episcopal Church.
Harris is a member of the Mystery Writers of America and the American Crime Writers League. She is a member of the board of Sisters in Crime, and alternates with Joan Hess as president of the Arkansas Mystery Writers Alliance.

« The Dark Rising
The Immortality Virus »