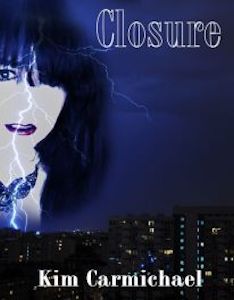 There's always the one…
He's one person throughout life you think about every so often, the one who leaves his unique indelible mark on you, the person with whom you need closure.
For Margaret Collins that person was Mike Taylor. After he broke her heart seventeen years ago, she left everything she knew and reinvented herself. With a new home, a new look and a new name, Riley Williams is now an up and coming journalist given the assignment to interview a Mike Taylor. She never suspected he would be her Mike Taylor.
With Mike having no hint of Riley's true identity, she must decide if she will make him pay for sins he doesn't remember committing, or if she can wipe away the past and be with the one man who she has always wanted?
Can she finally have closure?

I don’t tend to read a lot of erotic romance because sometimes that there just isn’t enough story to go with the sex.  This is not the case with Closure!  It was hot, hot, HOT, but it has a fantastic story to go with it!  I loved Riley, loved that she wasn’t perfect, even when she tried to be.  I loved that she was a real person with a past full of angst just like a lot of us have had.  There is always that guy that we were head over heels for, and it was totally unrequited.  The second chance in Closure, became just that, a second chance instead of the closure she thought she wanted.  That’s a fantastic fantasy and made for a fun read.  Mike, too, although a bit heavy-handed for my personal taste, was perfect for the story.  Written any other way other than he was would have made for a less impactful story.

Loved it!  It’s a quick read with a good mix of steaminess and story!

Kim Carmichael began writing eight years ago when her love of happy endings inspired her to create her own.

A Southern California native, Kim’s contemporary romance combines Hollywood magic with pop culture to create quirky characters set against some of most unique and colorful settings in the world.

With a weakness for designer purses, bad boys and techno geeks, Kim married her own computer whiz after he proved he could keep all her gadgets running and finally admitted handbags were an investment.

Kim is a PAN member of the Romance Writers of America, as well as some small specialty chapters. A multi-published author, Kim’s books can be found on Amazon as well as Barnes & Nobel, iTunes and other venues. From alcohol to makeup to infrared cameras and even scientific lasers studying the atmosphere, Kim has worked in some aspect of sales and marketing for over twenty years.

When not writing, she can usually be found slathered in sunscreen trolling Los Angeles and helping top doctors build their practices.