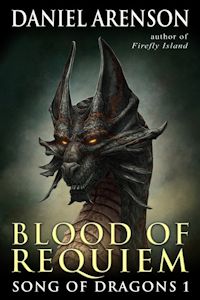 Long ago stood the kingdom of Requiem, a land of men who could grow wings and scales, breathe fire, and take flight as dragons. Requiem ruled the sky.

But Dies Irae, a tyrant leading an army of griffins, hunted Requiem's people, burned their forests, and shattered their temples. Requiem fell. This ancient land now lies in ruin, its halls crumbled, its cries silenced, its skeletons littering the burned earth.

In the wilderness, a scattering of survivors lives in hiding. The griffins still hunt them, and every day promises death. Will Requiem's last children perish in exile... or once more become dragons and fly to war?

Blood of Requiem is the first novel in the Song of Dragons, a epic fantasy series.  The basis for the book, as with most fantasy of this style, is the struggle between good and evil.  Very clear lines were drawn between good and evil, and the heroes and villains were also very clearly delineated.  As a rule, I generally like more grayness in my fantasy, rather than such clear lines as in the typical fantasy formula, or framework.  However, the flow and pace of the story and the details that filled in that formula more than made up for any lack of ambiguity.

Many times, fantasy written as an epic tale, much like Lord of the Rings, can become bogged down with detail and such.  This was not the case with this book.  Arenson’s use of language made the details a rich part of the story rather  than dry descriptions.

If you like a classic epic fantasy read, then this one is a good one to pick up and read.  The next book will be Tears of Requiem, to be published in October of 2011.

Daniel Arenson is a bestselling author of epic fantasy.

Three of his trilogies—Song of Dragons, Dragonlore, and The Dragon War—are set in Requiem, a world where humans can turn into dragons. He’s also the author of Moth, a series about a world torn in two—its one half always in sunlight, the other always dark. Several of Daniel’s novels have hit Amazon’s overall Top 100 bestsellers list; one has hit the Top 20. In total, his books have sold over 300,000 copies.

Raised on Dungeons & Dragons, Lord of the Rings, and scratchy Star Wars VHS tapes, Daniel still consumes—and tries to contribute to—geek culture. He lives in Canada with his wife and pet birds.

« Beyond the Grave
Concerto »