So far, life in Peachville has been tough for Harper Madison. She's survived attacks on her life, learned how to control her magic, and met the most gorgeous boy — who also happens to be a demon. After her latest stunt at Brighton Hospital, the Order of Shadows is determined to tighten their control on her life. So when a future Prima from a nearby demon gate comes to town, she and Harper decide to use magic to switch places at a party. All Harper wants is to have a little fun.

But the night will end in blood.

And Harper will find out the attack was meant for her...

Sarra Cannon has quickly become one of my favorite authors with her Peachville High Demons series.  Bitter Demons is the third book and the series, and my favorite thus far.  Cannon is brilliant at weaving suspense and intrigue in her stories.  She keeps you guessing throughout the story and the twists and turns are always unexpected and fascinating.  The plot thickened in Bitter Demons and I couldn’t put it down!

Harper and Jackson are the perfect teenage couple, facing adverisity in the struggle to find their way through neverending and confusing conflict.  Harper has been thrown into a world she knows nothing about and doesn’t know whom she can trust.  You can feel her frustration as she tries to find out more about her own past and the future that everyone is forcing upon her.  Jackson has secrets, secrets he doesn’t want to acknowledge and as you find out more about him, he becomes a completely sympathetic character.  In most popular paranormal fiction, demons are the bad guys.  I like that in the Peachville High Demons series, it isn’t that black and white.  As the twists and turns in the plot, the lines between the demons and the witches become blurry, never entirely sure which is “good” and which is “evil”.  That just adds to the suspense of the story. I absolutely cannot wait for the next book in the series, Shadow Demons, due out later this year! 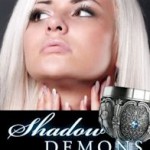