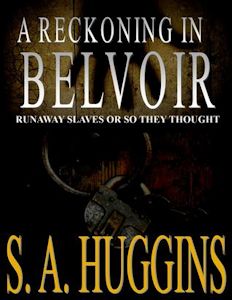 By the early fall of 1863, most of Belvoir’s townsfolk had gotten used to soldiers coming and going, food supplies dwindling to almost nothing, and runaway slaves leaving to join the Union army. What they hadn’t gotten used to was the serial killer roaming the Randolph farm on the outskirts of town. Two women, one a slave and the other, the wife of a slave owner, find themselves linked to the killer in this 70,000 word novel, BELVOIR.

Set near the end of the Civil War, this suspense novel written in the literary tradition uses superstition, betrayal, and vengeance to conjure a world where the evils of man survive death, and the consequences of war collide with everyday living.

Martha mourns the life she had before the war. With someone murdering her family’s slaves, she not only fears she might lose her farm to the Yankees, but now also worries that the killer will come for her sons and grandsons next. Ethel is rearing a mute son who is just reaching the crossroads of manhood. She should be envisioning freedom and the life that she and her son will soon have. But she can’t. The killer is the first thing she thinks of in the morning and her last thought at night.

Martha and Ethel are bound to a tragedy that began ten years earlier when one of the Randolph slaves tried to run away. Neither of them knew it at the time, but they each played a part in a doomed and enduring legacy. They now have to decide how to face the consequences of their actions and determine if there is anything they can do to end the killing at the farm.

This was a really interesting read, unlike anything I have read before.  The author instantly drew me into the time of the events, making me feel as if I were in the story itself.  Set in the time of the Civil War, the story follows the stories of the Randolph’s and the slaves on their plantation.  In their midst is a slave killer who kills and leaves the bodies in the most gruesome of ways.  As the story unfolded, the stories of the white slave owner’s wife and the black slave are both integral to the ending of the killings at the farm in ways neither woman would ever have believed possible.

The book is very well-written, almost written in the style of books penned in that era.  The author is gifted at being able to pull a reader into the story, making you feel as if you are present in the story.  That is something I generally don’t experience in the historical genres.  The characters, although from a different time and lifestyle, were extremely relatable, allowing you to feel their emotions as you read their stories.  These things, combined with the author’s incredible descriptiveness, made for a very interesting read. If you like historical suspense, then this is the book for you!