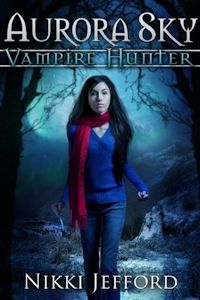 If there is one thing eighteen-year-old Aurora Sky wants, it's to get off the iceberg she calls home. Being kissed before she graduates wouldn't hurt either.
Then a near-fatal car wreck changes everything. Government agents step in and save Aurora's life in exchange for her services as a vampire hunter. In Alaska. Basically she's a glorified chew toy. All thanks to her rare blood type, which sends a vampire into temporary paralysis before she has to finish the job...by hand.
Now Aurora's only friends are groupies of the undead and the only boy she can think about may very well be a vampire. And if he's a vampire, will she be forced to kill him?

Aurora Sky is the first book in the new Aurora Sky:  Vampire Hunter & Giveaway series by Nikki Jefford, author of the fantastic Spellbound trilogy.  Below this review will be a giveaway for some book swag and some books, so be sure to enter that, too!  I got this ARC from the author and began reading within moments and couldn’t put it down.  It is unlike anything I have read, an entirely new twist on the vampire genre.  Mystery, intrigue, conspiracy theory, teen angst, horror, and even some humor combine to make this a really great read.  The book pulled me in so much that there were times when I realized I just wanted to slap some of the characters on Aurora’s behalf!  I love a book that draws me in like that!

Aurora opens the story as a fairly typical teen girl, with all the angst and awkwardness that you would expect.   But a horrific car accident changed all of that for her, turning her into someone I don’t think even she really recognizes.  While she was recovering, her mother made choices for her that have lifetime ramifications for Aurora.  That theme, that Aurora was essentially being extorted into living a life she wouldn’t have chosen for herself, was a big part of the emotional pull for me.  While I understand why her mother did the things she did, the fact that Aurora had no choice made me feel all of the frustration that Aurora herself felt.  It made her a very real character for me.  All of the characters, regardless of their role within the story, were completely three dimensional, whether you liked them or not.  And there were definitely several that I truly disliked!  Some of the less central characters were so well developed that it allowed the reader to know them, reminding me of people I known in my own life.  Of course, most of these were in a negative way!

The vagely “conspiracy theory” aspect of the government’s involvement in saving Aurora adds a different element to the horror of the story.  It definitely elicits emotion from the reader, a protective feeling for Aurora.  There are lots of twists and turns, horror and action, even some romance and fun.

This is a really great read if you like mystery and intrigue.  I highly recommend this read!  It is also freshly released so go get it now! 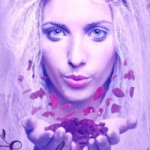 « Because of You
The Forever Girl Blog Tour, Treasure Hunt, & Excerpt »