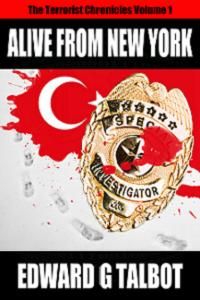 The half-novel (35,000 words), Alive From New York, is the first book in the Terrorist Chronicles series.

Reporter Jamie Marks has the scoop of a lifetime, an interview with the world's most wanted terrorist. She would kill - or die - for the story. But she's not the only one interested in how it turns out. The FBI has her under surveillance. The CIA has its own plans for her. And then, she disappears.

FBI Agent James Robb can't understand how they lost her, but that will soon be the least of his worries. A car bomb at the Bureau parking garage, then a dead agent in upstate New York, tell him there's a lot more to this story. As he investigates, he becomes convinced that something insidious is happening in the frigid altitude of the Adirondack mountains. But the battle he's engaging has a lot more than two sides, and the price of finding answers might be more than he can pay.

Alive from New York is the first in the new Terrorist Chronicles series by the writing duo known as Edward G. Talbot.  The most interesting side note to this book is that it centers around the “death” of bin Laden, and was published before that happened in reality.  Being former military intelligence myself, I love a good book involving intrigue in and around the intelligence community.  This book definately delivered all of that.  And being from, and currently living in, the Adirondacks, I also liked the shout out to upstate NY, although I am considerably more upstate than the area they used in the story.

The story instantly hooked me and it was one of those books that I just didn’t want to put down.  The suspense began from almost the first page and didn’t stop until the end, which I really enjoyed.  The story made twist after twist and took turn after turn throughout the story.  There was a little bit of everything in this story:  suspense, thrills, adventure, betrayal.  The authors used the age old rivalry for supremecy between the FBI and the CIA as the underlying basis for the entire story and it was extremely well done.  The characters, whether you liked or identified with them or not, were fully three-dimensional.  I loved that, mixed in with all of the suspense and action, was some really great humor.  Rox, Robb’s second, was one of my favorite characters in the book even though she wasn’t at the forefront of the entire book.  I like the no-nonsense attitude and I loved the humor that came from her.  As I read the book, I could think of people I had met throughout my own career that reminded me of the various charcters in the story.

There was a moment in the middle of the book, as part of the story started to come together, when I wondered where it was going and if I would be able to review it properly and fairly and in the way it deserved.  At times, the book seems to use various conspiracy theories as the inspiration for the storyline.  It touched on one that, in light of the current state of affairs with the death of bin Laden, started to bother me.  I am an Army wife to a soldier currently deployed in Afghanistan and I am also an Army veteran.  Because of that, I wondered if it was going to a place that I wouldn’t feel comfortable with promoting via my blog.  But the book was so engrossing, I continued on, and I am so glad that I did.  In the end, it did make me uncomfortable at times, but it also made me think.  And it is the kind of book that that will stick with me long after I have finished.  I like that. In a lot of ways, this book reminded me a lot of Nelson DeMille and David Baldacci.  I highly recommend this series! 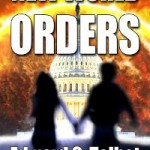