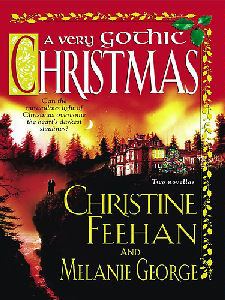 AFTER THE MUSIC by CHRISTINE FEEHAN

Terrified by mysterious threats, Jessica Fitzpatrick spirits away her twin wards, Tara and Trevor, to the remote island mansion of their estranged father, world-famous musician Dillon Wentworth. Ever since the fire that claimed his troubled wife's life and left him horribly disfigured, Dillon has shut out the world. With Christmas approaching, the spark between him and Jessica might light the future, but there are those who shared Dillon's wife's love of the occult . . . and their evil machinations may plunge the family into darkness -- unless a Christmas miracle occurs. . . .

LADY OF THE LOCKET by MELANIE GEORGE

The echoes of history and romance lure Rachel Hudson to Glengarren, the Scottish castle where her parents met many Christmases ago. But it is the portrait of fierce Highlander Duncan MacGregor that sparks an inexplicable yearning inside her. On a storm-tossed night, as lightning cracks across the castle's turrets, Rachel finds herself face-to-face with MacGregor himself, astride a mighty stallion. Now, stepping into Rachel's time -- and her heart -- the warrior from the past is pursued by an ancient, evil enemy. . . .

As A Very Gothic Christmas is an collection of novellas by two different authors, each will be given a rating of its own.

After the Music by Christine Feehan

Jessica arrives on a remote island in the midst of a horrible storm with the twins who have been practically her own since their birth 13 years ago.  Tara and Trevor haven’t seen their father for many years, since a terrible fire that changed all of their lives irrevocably.  But now, for reasons that soon come clear, Jessica has brought them to the island unannounced, knowing that their father will protect them when she can’t.

I don’t know that I would have necessarily called this “gothic” in the traditional sense, but I very much enjoyed the novella.  Sometimes novellas can be too short to allow you to become full invested in the characters, but I did not find this to be true with this story.  I was able to feel for Jessica from the opening scene and for the twins throughout the story.  There were many twists and turns and I was kept guessing until the very end; the suspense kept me on the edge throughout the novella. A quick read that I would recommend, especially for the holidays.

Lady of the Locket by Melanie George

Rachel arrives at Glengarren broken in spirit.  Having had a traumatic year, she has come to Scotland to fulfill the last wishes of her parents.  Glengarren was the place where her parents met and fell in love and it is where she must finally let go of them and say goodbye.  The castle is rumored to be haunted and Rachel’s life is changed forever when she meets the Highlander who was the first Lord of Glengarren, centuries earlier.

Of the two novellas, this second one was unexpectedly heartwrenching to me.  Rachel’s pain was almost palpable and I found myself feeling her sadness.  There was scene towards the end of such despair that I was in tears reading it. It was romantic and lovely and had a fairy tale ending, everything you want in a romance novel!

One final note:  These were definately not the typical holiday reads, but they did have heartwarming endings.  A great quick read!

I am a mother, first and foremost in my life. Family is very important to me. I have several children all of whom drive me crazy on a daily basis. And I have four Maltese that are even worse. LOL! I love living in the country and I find that it continues to inspire my writing.. which is my ultimate passion in life.

I am a writer and have been almost my entire life. I have to write every day or I’ll drive my family crazy. I first became a published author in 1999 with the release of Dark Prince. Before that I had a wide variety of jobs including being a full time mom, a martial arts instructor, a telephone operator, and I even worked for a newspaper. Now I’m able to write full time. I usually have four new books released per year.

Before she discovered romantic fiction, Melanie George was the CEO of an executive-search consulting firm. Her most important job, however, has always been that of mother, to both a much-adored son and two precious dogs. When she is not writing, she is trying to restore her hundred-year-old house and has come to the conclusion that paint speckles will more than likely be a permanent part of her person. M – See more at: http://authors.simonandschuster.com/Melanie-George/17044612#sthash.m30Lo3z6.dpuf

« The Red Church
The Pirate Queen »