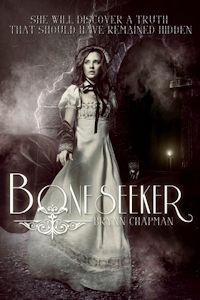 Arabella Holmes was born different and raised different. After it became apparent she wouldn't fit the role of a proper 1900's lady, her father, Sherlock, called in some lingering favors, and landed her a position at the Mutter Museum. The museum was Arabella's dream; she was to become a purveyor of abnormal science. What her father called a BoneSeeker.

Henry Watson arrives at the Mutter Museum with a double assignment--to become a finder of abnormal antiquities and to watch over and keep Arabella Holmes. An easy task, if he could only get her to speak to him instead of throwing knives in his general direction.

But this is no time for child's play. The two teens are assigned to a most secret exploration, when the hand of a Nephilim is unearthed in upstate New York. Soon, Arabella and Henry are caught in a fight for their lives as scientific debate swirls around them. Are the bones from a Neanderthal ... or are they living proof of fallen angels, who supposedly mated with humans according to ancient scrolls?

Boneseeker was far different than I had anticipated.  I have never been big into Sherlock Holmes, but I love mysteries and this seemed like something new and different, something outside of my usual reads.

The story centers around Arabella Holmes and Henry Watson, the children of the famed Sherlock Holmes and Dr. Watson.  Dr. Watson is a big part of this story, while Sherlock himself stays in the background.  I actually enjoyed that the big man played a lesser role in the story and put the other characters in the forefront because it is, after all, their story.

Arabella is a social rebel.  She doesn’t play the coquettish games that other society ladies play.  She has no idea of her own beauty and is much more focused on her mind and her science.  In many ways she reminded me of the character Temprence Brennan in the Bones TV series, based on Kathy Reich’s novels.  Her social skills lacked, but her mind was sharp.  She was my favorite part of the story, not because of her social awkwardness, but because she is a woman after my own heart, not afraid to buck the system and be different, be her own person.  Henry is much more of the societal norm in his personality, but different in that not only does he accept Arabella for who she is, he embraces it.

The Nephilim are a big part of this story, a theme that I am finding in more and more books.  However, their role in this was so very different from other books and I loved that.  There was a lot of varying mythology surrounding them, different theories that became integral to the story.  I love that those varying theories made the reader question their own thoughts.

My son is a forensic anthropologist and that was a big part of the reason that I wanted to read this.  I loved that take in a mystery as it is not a very common theme.  It was done very well and was fascinating!  The other thing that made me want to read this was the tease that some of it would take place in upstate NY.  I am from northern/upstate NY and I have to say, the area of NY referenced was not really upstate NY!

This was very different than what I usually read.  I am not huge into historicals, particularly this time period.  But I truly grew to enjoy this book!  Fantastic romance, great drama, fabulous mystery, and some truly interesting twists and turns!

Born and raised in western Pennsylvania, Brynn Chapman is the daughter of two teachers. Her writing reflects her passions: science, history and love—not necessarily in that order. In real life, the geek gene runs strong in her family, as does the Asperger’s syndrome. Her writing reflects her experience as a pediatric therapist and her interactions with society’s downtrodden. In fiction, she’s a strong believer in underdogs and happily-ever-afters. She also writes non-fiction and lectures on the subjects of autism and sensory integration and is a medical contributor to online journal The Age of Autism.

She also writes under the pseudonym R.R. Smythe .