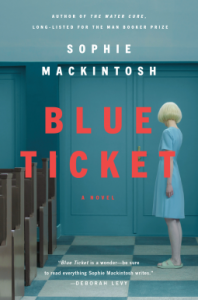 From the "ingenious and incendiary" (

comes another mesmerizing, refracted vision of our society: In a world where women can't have it all, is choice the biggest burden of all?

Calla knows how the lottery works. Everyone does. On the day of your first bleed, you report to the station to learn what kind of woman you will be. A white ticket grants you marriage and children. A blue ticket grants you a career and freedom. You are relieved of the terrible burden of choice. And once you've taken your ticket, there is no going back. But what if the life you're given is the wrong one?     When Calla, a blue ticket woman, begins to question her fate, she must go on the run. But her survival will be dependent on the very qualities the lottery has taught her to question in herself and on the other women the system has pitted against her. Pregnant and desparate, Calla must contend with whether or not the lottery knows her better than she knows herself and what that might mean for her child.     An urgent inquiry into free will, social expectation, and the fraught space of motherhood, Blue Ticket is electrifying in its raw evocation of jealousy and desire and riveting in its undeniable familiarity.

I absolutely loved The Water Cure, so I had the highest of hopes for this novel. But while I loved the premise of the novel, it just didn’t give me the experience I’d hoped for.

The premise was interesting: a story about expectations, free will, the definition of freedom, and the value of women. As noted in the blurb, as soon as she has her first cycle, girls report to the station to receive one of two kinds of tickets. A white ticket brings with it marriage and children. A blue ticket gives you relative freedom and a career. Those are the only pathways, and girls have no choice as to which path will be followed. As I said, an interesting premise.

But there were several things that undermined what were likely good bones.

All in all, as a dystopian novel, it lacked a lot for me.

Sophie Mackintosh was born in South Wales in 1988, and is currently based in London. Her fiction, essays and poetry have been published by Granta, The White Review, The New York Times and The Stinging Fly, among others. Her short story ‘Grace’ was the winner of the 2016 White Review Short Story Prize, and her story ‘The Running Ones’ won the Virago/Stylist Short Story competition in 2016.

« Nowhere on Earth
A Dark and Secret Place »