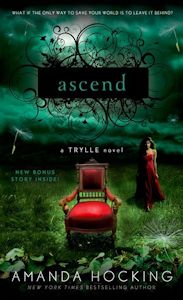 Wendy Everly is facing an impossible choice. The only way to save the Trylle from their deadliest enemy is by sacrificing herself.  If she doesn’t surrender to the Vittra, her people will be thrust into a brutal war against an unbeatable foe.  But how can Wendy leave all her friends behind…even if it’s the only way to save them?

The stakes have never been higher, because her kingdom isn’t the only thing she stands to lose. After falling for both Finn and Loki, she’s about to make the ultimate choice…who to love forever. One guy has finally proven to be the love of her life—and now all their lives might be coming to an end.

Everything has been leading to this moment.  The future of her entire world rests in her hands—if she’s ready to fight for it.

I have really enjoyed this series and I am sad to see it end!  I thought Ascend was a perfect conclusion, especially with the bonus short story at the end.  The world that was created was so interwoven with our own that it made it hard not to believe in the possibilities!

Wendy is a different person in this book than in the first.  She grew so much as she accepted her destiny and made it her own.  This is one of the things that I loved about her.  She accepted her destiny, but she also refused to accept those things about her new society that she felt were wrong.  Instead, she strives to make change, to make a rather stagnant society grow with her.  She has met with a lot of opposition from those traditionalists, but she stays true to herself.  The message there is inspiring.

There is a lot more action in this book, lots of twists and turns.  There were also some deeply emotional moments that truly tugged at the heart strings.  My feelings for various characters constantly changed throughout the book… loving them one moment and annoyed by them the next!

I loved this series and its premise and I am sad to see it end!