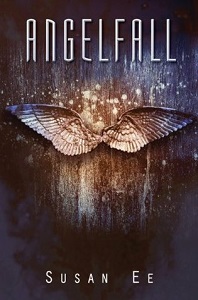 [color-box]It's been six weeks since angels of the apocalypse descended to demolish the modern world. Street gangs rule the day while fear and superstition rule the night. When warrior angels fly away with a helpless little girl, her seventeen-year-old sister Penryn will do anything to get her back.

Anything, including making a deal with an enemy angel.

Raffe is a warrior who lies broken and wingless on the street. After eons of fighting his own battles, he finds himself being rescued from a desperate situation by a half-starved teenage girl.

Traveling through a dark and twisted Northern California, they have only each other to rely on for survival. Together, they journey toward the angels' stronghold in San Francisco where she'll risk everything to rescue her sister and he'll put himself at the mercy of his greatest enemies for the chance to be made whole again.[/color-box]

This is one of those books that I have had on my mental “to be read” piles for a long time.  I had heard lots of wonderful things about it, but it just took me awhile to get through my rather lengthy queue to get to it.  And now that I have read it, I am wondering just why I waited?!!

It’s the end of the world as we know it.  Our heroine is bad ass.  Our hero is not just unlikely, but seemingly impossible.  A crazy family dynamic and the quest to save a precious loved one.  Danger, fantasy, humor, and twists and turns galore!  What more can you want, especially when it is all wrapped up in fantastic writing?!

It’s a post-apocalyptic world that comes at the hands of the angel.  It is an interesting twist on stereotypical angel lore as the mythos of the book is played out.  Angels are not quite so benevolent in this world and their actions are devastating for those on Earth.  Chaos reigns and it is clearly a time of survival of the fittest.

Penryn is the badass heroine and she is one of all-time favorites.  She is tough because she has to be.  The world has gone to hell and she has a mother and a little sister to protect.  She is determined, even when she knows that that determination is likely to cause her trouble.  But she doesn’t hesitate in her quest to do right by her family, even if it means sacrificing her own safety.

The story is told through Penryn’s eyes, but the other characters are equally as interesting and developed as Penryn herself.  One of these is Raffe, the angel that Penryn saves at the unintentional cost of her little sister.  He is mysterious and often pretty surly, but even with that, we still are able to get an idea of who he really is through his interactions with Penryn.  Her mother, too, is a character about whom little is revealed, but she is important to the story, even if we don’t yet know what drives her to act as she does.

The book is amazing, with twists and turns and a story that turns angel mythology on its side.  I love post-apocalyptic novels, although I tend to shy away from ones that may have religious themes… like angels.  But this is not at all like that and the story is simply amazing.  It isn’t a standard HEA book, but explores the dark side of humanity through angels, demons, and the humans caught in the middle.  This is a fantastic read and I highly suggest you read it.  The story line is gripping and unique!