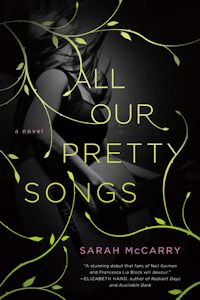 The first book in an exciting YA trilogy, this is the story of two best friends on the verge of a terrifying divide when they begin to encounter a cast of strange and mythical characters.

Set against the lush, magical backdrop of the Pacific Northwest, two inseparable best friends who have grown up like sisters—the charismatic, mercurial, and beautiful Aurora and the devoted, soulful, watchful narrator—find their bond challenged for the first time ever when a mysterious and gifted musician named Jack comes between them. Suddenly, each girl must decide what matters most: friendship, or love. What both girls don’t know is that the stakes are even higher than either of them could have imagined. They’re not the only ones who have noticed Jack’s gift; his music has awakened an ancient evil—and a world both above and below which may not be mythical at all. The real and the mystical; the romantic and the heartbreaking all begin to swirl together, carrying the two on journey that is both enthralling and terrifying.

And it’s up to the narrator to protect the people she loves—if she can.

All Our Pretty Songs is a truly unusual book.  It is one of those rare reads that I am finding difficult to process, unsure of how I feel about it.  It is a dark and disturbing read in so many ways, something I generally appreciate as it is a more realistic look at life.  The prose is very lyrical, with a sort of altered state feel to it, appropriate to the themes of overindulgence in booze and drugs that are key to the plot.  There are moments when that prose just takes you away from anything and everything that makes sense, but  it always comes back around and sucks you back into the madness.

The two main characters, Aurora and our nameless narrator.  Not once is that narrator’s name revealed, not even in dialogue.  That was an odd choice, an original approach that I can appreciate.  I think it was a mark of the character’s inherent feelings about herself.  Aurora is continually described in an almost ethereal way, beautiful and free-spirited and flirting with danger.  The narrator sees herself as more of a tomboy, less feminine and beautiful than Aurora.  She puts Aurora on a pedestal and seems to see herself as less special, less worthy.

The two girls are extremely codependent with one another, after a lifetime of essentially raising themselves and each other.  Their mothers were once the best of friends, but have been estranged for years.  Aurora’s mother Maia is a junkie now, spending most of her time in a haze, while Aurora runs wild and free as a rich girl without boundaries.  Cass is the narrator’s mother, poor as dirt and a witch hippie with as little mothering skills as her former friend.  Then enters Jack, the older boy of indeterminate age.  He is mysterious and beautiful and talented in a way that seems magical.  So much of the narrator’s story waxed poetically about him and his music, with metaphors and similes galore.  But his presence seems to signal inevitable destruction… for himself, for Aurora, and for our narrator.

There are moments of clarity throughout the story, but most of seems to take place in a bit of an altered state.  Some of that is due to booze and drugs, but there are moments when it made me wonder about the mental health of the narrator.  It was like she continually lived in another world, another reality, one that was dark and disturbing and based in her own mind.  There is a lot of “stream of consciousness type prose which elevates that altered state sort of feeling.

I am not sure how it is possible, but throughout the second half of the book the story became more focused while the prose became increasingly more wandering.  That increased stream of consciousness prose lent itself to the feeling of chaos and further descent into destruction/madness that was taking place.

There was a paranormal aspect to this book, to be sure.  But the meandering prose and drug/booze themes sometimes made that aspect seem as much a result of those substances as anything else.

This is such an unusual book.  If you like your reads straightforward and clear, this is not the book for you.  But if you enjoy the dark, the disturbing, and the mind trip… this is an excellent read.

« The Kiss of Deception
Dirty Wings »