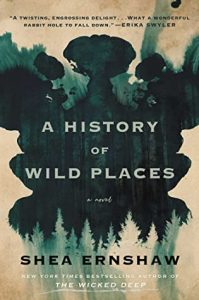 Travis Wren has an unusual talent for locating missing people. Hired by families as a last resort, he requires only a single object to find the person who has vanished. When he takes on the case of Maggie St. James—a well-known author of dark, macabre children’s books—he’s led to a place many believed to be only a legend.

Called "Pastoral," this reclusive community was founded in the 1970s by like-minded people searching for a simpler way of life. By all accounts, the commune shouldn’t exist anymore and soon after Travis stumbles upon it… he disappears. Just like Maggie St. James.

Years later, Theo, a lifelong member of Pastoral, discovers Travis’s abandoned truck beyond the border of the community. No one is allowed in or out, not when there’s a risk of bringing a disease—rot—into Pastoral. Unraveling the mystery of what happened reveals secrets that Theo, his wife, Calla, and her sister, Bee, keep from one another. Secrets that prove their perfect, isolated world isn’t as safe as they believed—and that darkness takes many forms.

Hauntingly beautiful, hypnotic, and bewitching, A History of Wild Places is a story about fairy tales, our fear of the dark, and losing yourself within the wilderness of your mind.

A History of Wild Places was such an engrossing read, and a twisty one, too!

The book felt much like M. Night Shyamalan’s The Village, with the cultish atmosphere. The community started as most cults do… a group of likeminded people who want their own utopia tucked deep into the woods. But as always happens, corruption breeds and what was once idyllic becomes less so. Disease has crept to their borders, infecting. Anyone who crosses the border will be infected, death soon to follow. So the community has become completely insular, with no contact whatsoever with the outside world. It’s been so long that many outside the community have forgotten it ever existed. But then something happens, and the cracks begin to show, questions begin to be asked. What is happening among the trees? What is the infection? Why is there such secrecy between Travis and Calla? How is it that Travis has secretly gone beyond the border, yet remains healthy, as do those around him? So many questions, so many twists, so many answers! The ending was surprising, yet very satisfying.

The characters are incredibly well developed, and the atmosphere was so brilliantly built that I felt as if I were an observer within the community. It is both haunting and eerily beautiful, a book that lingers long after you’ve closed it. A History of Wild Places is a book I will definitely read again!

Shea Ernshaw is a NYT bestselling author and winner of the Oregon Book Award. Her books have been published in over twelve countries/languages, and her novels The Wicked Deep and Winterwood were Indie Next Picks. Her debut adult fiction novel A History of Wild Places will release in December of 2021. She lives in a small mountain town in Oregon, and is happiest when lost in a good book, lost in the woods, or writing her next novel.