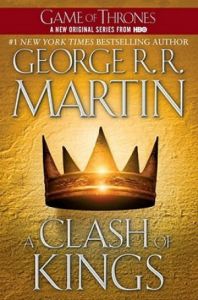 Time is out of joint. The summer of peace and plenty, ten years long, is drawing to a close, and the harsh, chill winter approaches like an angry beast. Two great leaders—Lord Eddard Stark and Robert Baratheon;who held sway over an age of enforced peace are dead...victims of royal treachery. Now, from the ancient citadel of Dragonstone to the forbidding shores of Winterfell, chaos reigns, as pretenders to the Iron Throne of the Seven Kingdoms prepare to stake their claims through tempest, turmoil, and war.

As a prophecy of doom cuts across the sky;a comet the color of blood and flame;six factions struggle for control of a divided land. Eddard;s son Robb has declared himself King in the North. In the south, Joffrey, the heir apparent, rules in name only, victim of the scheming courtiers who teem over King's Landing. Robert's two brothers each seek their own dominion, while a disfavored house turns once more to conquest. And a continent away, an exiled queen, the Mother of Dragons, risks everything to lead her precious brood across a hard hot desert to win back the crown that is rightfully hers.

A Clash of Kings transports us into a magnificent, forgotten land of revelry and revenge, wizardry and wartime. It is a tale in which maidens cavort with madmen, brother plots against brother, and the dead rise to walk in the night. Here a princess masquerades as an orphan boy; a knight of the mind prepares a poison for a treacherous sorceress; and wild men descend from the Mountains of the Moon to ravage the countryside.

Against a backdrop of incest and fratricide, alchemy and murder, the price of glory may be measured in blood. And the spoils of victory may just go to the men and women possessed of the coldest steel...and the coldest hearts. For when rulers clash, all of the land feels the tremors.

This second book in the A Song of Fire and Ice series is even more action packed than A Game of Thrones.  Chaos reigns in the seven kingdoms with now five kings fighting for the Iron Throne.  I love the format of these books, chapters that alternate between characters.  The chapters tell the stories of A Clash of Kings from their different perspectives, allowing us to see the war from within the minds of people from all sides.

The military girl in me really enjoyed the battle tactics that were so much a part of this book, especially for Tyrion Lannister.  His character is continually undervalued and dismissed by the others in the series, simply because of his size.  In reality, he is extremely intelligent and an excellent strategist and I loved his chapters the most!  At first, he began to set things in motion that led me to wonder what exactly he was up to, wondering how it would all come together.  But he is brilliant and cunning in his plans, showing those traits that I think are most important in a battle strategist/commander… knowing the abilities/limitations of not just your enemy, but your own men and using those to advantage.

Such a great novel!  This not a read for the faint of heart.  The battles, the betrayals, the violence, the seediness.  The only thing I truly wanted more of was Jon Snow and the Wall! 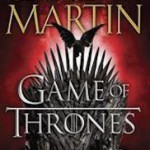